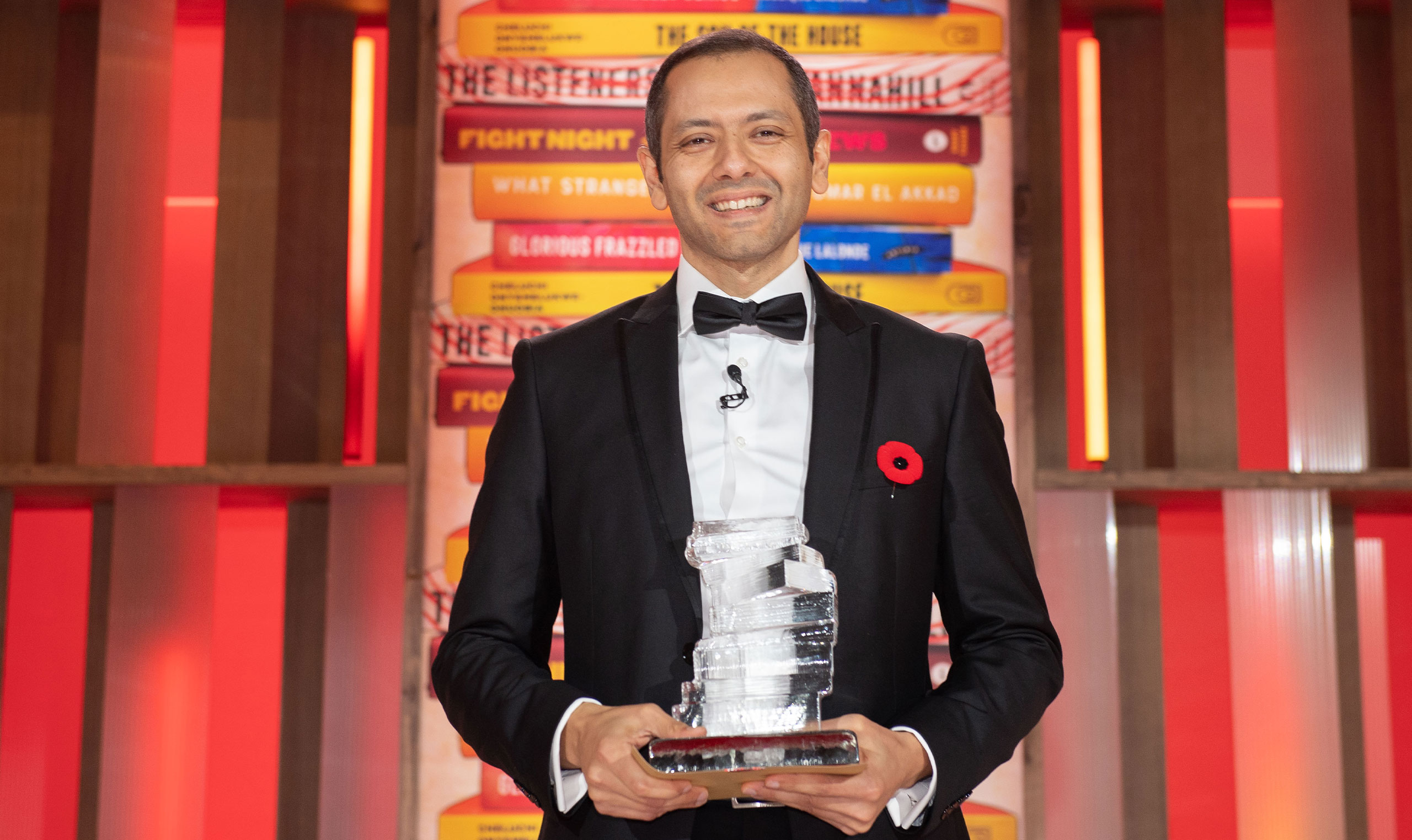 November 8, 2021 (Toronto, Ontario) – Omar El Akkad has been named the winner of the 2021 Scotiabank Giller Prize for his novel, What Strange Paradise, published by McClelland & Stewart, taking home $100,000 courtesy of Scotiabank.

The announcement was made at a black-tie dinner and award ceremony hosted by poet, artist and performer Rupi Kaur and Canadian actor Paul Sun-Hyung Lee, attended by about 200 members of the publishing, media and arts communities. The gala was broadcast live commercial-free presented by Scotia Wealth Management on CBC, CBC Radio One and streamed live on CBC Gem and CBCBooks.ca.

This year, the Prize celebrates its 28th anniversary.

The remaining finalists, listed below, will each receive $10,000:

The longlist, shortlist, and winner of the 2021 Scotiabank Giller Prize were selected by an esteemed five-member jury panel: Canadian authors Zalika Reid-Benta (Jury Chair), Megan Gail Coles and Joshua Whitehead, Malaysian novelist Tash Aw and American author Joshua Ferris. The jury narrowed down the 132 submitted works to 12 to create the longlist and on October 5, announced the shortlisted authors before picking tonight’s winner.

Amid all the anger and confusion surrounding the global refugee crisis, Omar El Akkad’s What Strange Paradise paints a portrait of displacement and belonging that is at once unflinching and tender. In examining the confluence of war, migration and a sense of settlement, it raises questions of indifference and powerlessness and, ultimately, offers clues as to how we might reach out empathetically in a divided world.

Omar El Akkad is an author and journalist. His debut novel, American War, was an international bestseller and has been translated into thirteen languages. It won the Pacific Northwest Booksellers Association Award, the Oregon Book Award for fiction, and the Kobo Emerging Writer Prize. He lives in Portland, Oregon.

Listen to CBC Radio’s q tomorrow at 10 a.m. ET (10:30 NT) for an interview with Omar El Akkad and relive the gala at CBCBooks.ca.

Ask the author your questions about his book during a live Twitter chat hosted by @GillerPrize on Wednesday, November 10, at 2 p.m. ET using the hashtag #GillerWinner.

Images from tonight’s gala will be available on the Media Resources page at www.scotiabankgillerprize.ca.

Quotes
It’s nothing short of thrilling to be here tonight to celebrate all the finalists and to honour Omar El Akkad on his win for What Strange Paradise. The book is unflinching in its examination of our current refugee crisis and the lengths to which people will go to find home, safety and belonging. A brilliant book by a brilliant author to whom I wish continued success and ongoing recognition.”
– Elana Rabinovitch, Executive Director, Scotiabank Giller Prize

PARTNERSHIPS AND SPONSORSHIPS:
The winner of the Scotiabank Giller Prize will be honoured with a virtual interview as part of the online 2022 San Miguel Writer’s Conference & Literary Festival, on February 13, 2022. This is the second year the Literary Festival has gone online, to much success. Other notable interviews have included both Tom Hanks and Matthew McConaughey, along with Margaret Atwood, Isabel Allende, Isabel Wilkerson, Emma Donahue, and many more.

The winner of the Scotiabank Giller Prize will be given an opportunity to explore, expand, and develop their practice during a two-week, self-directed residency in Banff Centre for Arts and Creativity’s exclusive Leighton Artists’ Studios. Located on Treaty 7 Territory in Banff National Park, Banff Centre is Canada’s largest post-graduate arts and leadership training institute (banffcentre.ca).

About the Prize
The Giller Prize, founded by Jack Rabinovitch in 1994, highlights the very best in Canadian fiction year after year. In 2005, the Prize teamed up with Scotiabank who increased the winnings four-fold. The Scotiabank Giller Prize now awards $100,000 annually to the author of the best Canadian novel, graphic novel or short story collection published in English, and $10,000 to each of the finalists. The award is named in honour of the late literary journalist Doris Giller by her husband Toronto businessman Jack Rabinovitch, who passed away in August 2017.

About Scotiabank
Scotiabank is a leading bank in the Americas. Guided by our purpose: “for every future” we help our customers, their families and their communities achieve success through a broad range of advice, products and services, including personal and commercial banking, wealth management and private banking, corporate and investment banking, and capital markets. With a team of over 90,000 employees and assets of approximately $1.2 trillion (as at July 31, 2021), Scotiabank trades on the Toronto Stock Exchange (TSX: BNS) and New York Stock Exchange (NYSE: BNS). For more information, please visit http://www.scotiabank.com and follow us on Twitter @ScotiabankViews.

About Audible, Inc.
Audible, Inc., an Amazon.com, Inc. subsidiary (NASDAQ:AMZN), is a leading creator and provider of premium audio storytelling, offering customers a new way to enhance and enrich their lives every day. Audible.ca content includes more than 630,000 audiobooks, podcasts, and Audible Originals. Audible has millions of members around the world who subscribe to one of 11 localized services designed for customers in Australia, Canada, France, Germany, India, Italy, Japan, Spain, the UK, and the US. Audible members download nearly 4 billion hours of content annually and listen across a wide range of supported devices.

About Indigo
Indigo is a publicly traded Canadian company listed on the Toronto Stock Exchange (IDG). Indigo is Canada’s leading book and lifestyle retailer, offering a curated assortment of books, gifts, baby, kids, wellness, and lifestyle products, that support their customers every day and at key life stages by simplifying their journey to live with intention. Indigo believes in real books, in living life fully and generously, in being kind to each other and that stories – big and little – connect us. For more information on Indigo, visit indigo.ca.