Skip to content
The Scotiabank Giller Prize Presents its 2021 Longlist 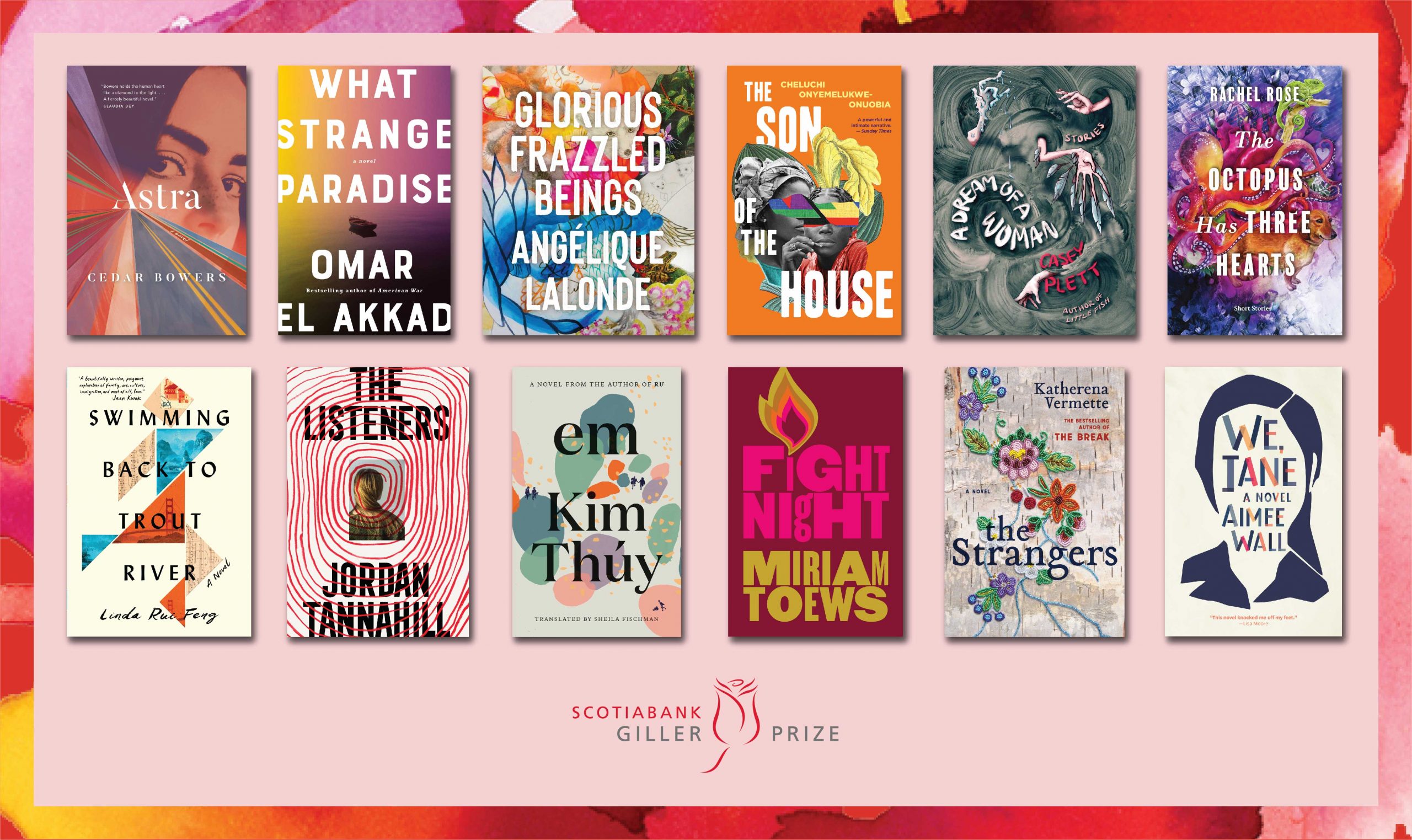 The 12 titles were chosen from a field of 132 books submitted by publishers from across Canada.

This year the Prize celebrates its 28th anniversary. The longlist for the 2021 Scotiabank Giller Prize is:

The longlist was selected by an esteemed panel of five judges: Canadian authors Zalika Reid-Benta (Jury Chair), Megan Gail Coles, Joshua Whitehead, Malaysian novelist, Tash Aw and American author, Joshua Ferris. Each judge was given access to a complimentary Audible.ca account, providing an opportunity to listen to the submissions that were available on Audible’s service.

“In a year of logistical challenges and the continued relevance of Zoom, the jury of the 2021 Scotiabank Giller Prize has emerged from many hours of private reading and many rounds of lively debate with a longlist of twelve titles. This extraordinary dozen showcases an ecstatic diversity of voices and styles, of narrative deployment and moral urgency, of formal innovation and old-fashioned storytelling pleasure. There is something for everyone on this list, but within each of these books there is to be found beauty, honest reckoning, human compassion, and the irrefutable mark of the sublime. It was the jury’s great honor to delight in the manifold achievements of these books, and with their announcement we leave this debate settled for another year: Canada’s literature is as vibrant and expansive as ever.”

Rakuten Kobo generously donated a Kobo Aura Edition 2 eReader to each member of the 2020 jury panel. For all media resources including author photos and book cover artwork, please visit www.scotiabankgillerprize.ca/media-resources.

“The jury has selected a dazzling group of writers to represent the very best in Canadian fiction for 2021. There’s no denying the enormous impact of women’s writing on the literary scene this year. I’m grateful to each jury member for their razor-sharp reading and delighted for this year’s longlisted writers.”
– Elana Rabinovitch, Executive Director, Scotiabank Giller Prize

“The last year has continued to be one of uncertainty for Canada and for Canadians and many have found comfort between the pages of a good book. Scotiabank proudly congratulates the 12 longlisted authors of the 2021 Scotiabank Giller Prize as they have provided readers with comfort, escape and adventure during these challenging times.”
-John Doig, Executive Vice President, Retail Distribution, Scotiabank

Between the Pages: An Evening with the Scotiabank Giller Prize Finalists will be presented at Koerner Hall in Toronto, on November 4. Hosted by Jael Richardson, it will be an hour of readings, questions and answers, and will take you inside the minds and creative lives of the writers on the 2021 shortlist. For more information, please visit: www.scotiabankgillerprize.ca/news-events/events-and-important-dates.

The Giller Prize, founded by Jack Rabinovitch in 1994, highlights the very best in Canadian fiction year after year. In 2005, the prize teamed up with Scotiabank who increased the winnings 4-fold. The Scotiabank Giller Prize now awards $100,000 annually to the author of the best Canadian novel, graphic novel or short story collection published in English, and $10,000 to each of the finalists. The award is named in honour of the late literary journalist Doris Giller by her husband Toronto businessman Jack Rabinovitch, who passed away in August 2017.

Scotiabank is a leading bank in the Americas. Guided by our purpose: “for every future” we help our customers, their families and their communities achieve success through a broad range of advice, products and services, including personal and commercial banking, wealth management and private banking, corporate and investment banking, and capital markets. With a team of over 90,000 employees and assets of approximately $1.2 trillion (as at July 31, 2021), Scotiabank trades on the Toronto Stock Exchange (TSX: BNS) and New York Stock Exchange (NYSE: BNS). For more information, please visit http://www.scotiabank.com and follow us on Twitter @ScotiabankViews.

CBC/Radio-Canada is Canada’s national public broadcaster. Through our mandate to inform, enlighten and entertain, we play a central role in strengthening Canadian culture. As Canada’s trusted news source, we offer a uniquely Canadian perspective on news, current affairs and world affairs. Our distinctively homegrown entertainment programming draws audiences from across the country. Deeply rooted in communities, CBC/Radio-Canada offers diverse content in English, French and eight Indigenous languages. We also deliver content in Spanish, Arabic, Chinese, Punjabi and Tagalog, as well as both official languages, through Radio Canada International (RCI). We are leading the transformation to meet the needs of Canadians in a digital world. Watch the 2021 Scotiabank Giller Prize on Monday, November 8, at 9 p.m. (12 midnight NT, 11:30 p.m. AT) on CBC TV and the free CBC Gem streaming service. A livestream will be available on CBC Books, and a broadcast special will be available on CBC Radio One and the CBC Listen App. For more information visit, cbcbooks.ca/gillerprize.

Audible, Inc., an Amazon.com, Inc. subsidiary (NASDAQ:AMZN), is a leading creator and provider of premium audio storytelling, offering customers a new way to enhance and enrich their lives every day. Audible.ca content includes more than 630,000 audiobooks, podcasts, and Audible Originals. Audible has millions of members around the world who subscribe to one of 11 localized services designed for customers in Australia, Canada, France, Germany, India, Italy, Japan, Spain, the UK, and the US. Audible members download nearly 4 billion hours of content annually and listen across a wide range of supported devices.