The 2021 Scotiabank Giller Prize jury announced its longlist on Wednesday, September 8, 2020. The 12 titles were chosen from a field of 132 books submitted by publishers all across Canada. 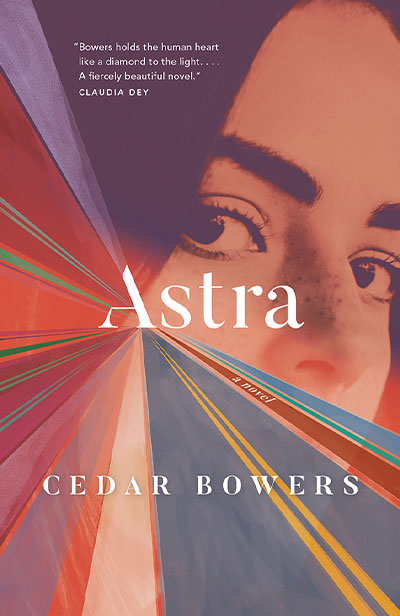 CEDAR BOWERS’s fiction has been published in Joyland and Taddle Creek. Astra is her first novel. With her husband, novelist Michael Christie, and their two children, she divides her time between Galiano Island, where she grew up, and Victoria. 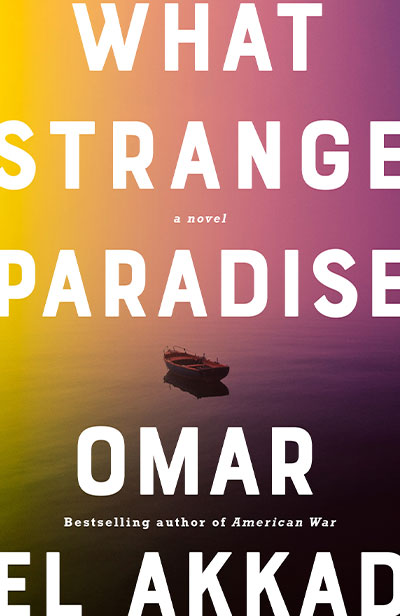 OMAR EL AKKAD is an author and journalist. His debut novel, American War, was an international bestseller and has been translated into thirteen languages. It won the Pacific Northwest Booksellers Association Award, the Oregon Book Award for fiction, and the Kobo Emerging Writer Prize. He lives in Portland, Oregon. 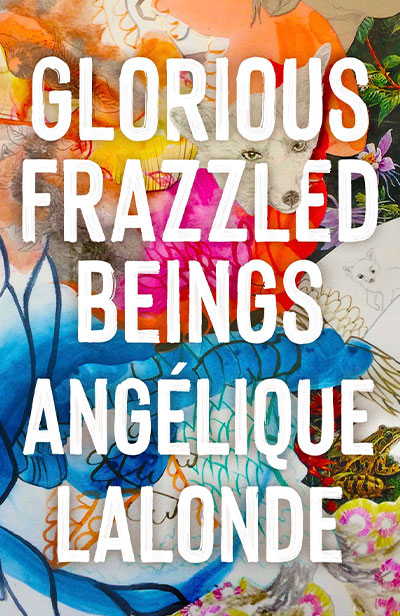 ANGÉLIQUE LALONDE was the recipient of the 2019 Journey Prize, has been nominated for a National Magazine Award, and was awarded an Emerging Writer’s residency at the Banff Centre. Her work has been published in numerous journals and magazines. She holds a Ph.D. in Anthropology from the University of Victoria. Lalonde is the second-eldest of four daughters. She dwells on Gitxsan Territory in Northern British Columbia with her partner, two small children, and many non-human beings. 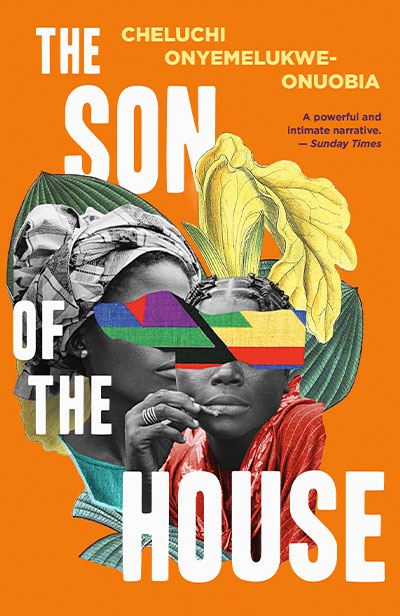 Cheluchi Onyemelukwe-Onuobia is a lawyer, academic, and writer. She holds a doctorate in law from Dalhousie University and works in the areas of health, gender, and violence against women and children. Cheluchi divides her time between Lagos and Halifax. 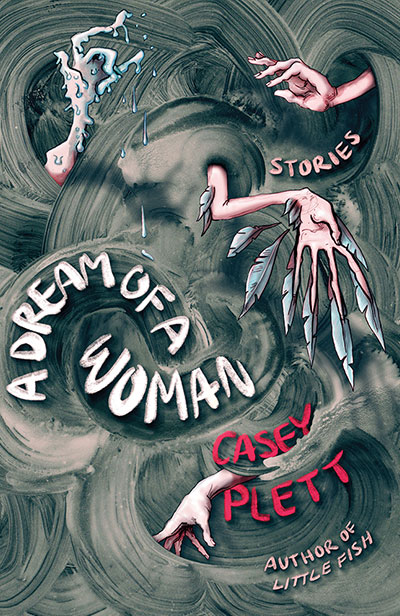 A Dream of a Woman by Casey Plett

Casey Plett is the author of the novel Little Fish (Arsenal Pulp Press), winner of the Amazon Canada First Novel Award and a Lambda Literary Award, and the short story collection A Safe Girl to Love (Topside Press), also a Lambda Literary Award winner. She is also the co-editor of the anthology Meanwhile, Elsewhere: Science Fiction and Fantasy from Transgender Writers (Topside Press). She wrote a column on transitioning for McSweeney’s Internet Tendency and her essays and reviews have appeared in The New York Times, Maclean’s, The Walrus, Plenitude, the Winnipeg Free Press, and other publications. She is the winner of a Lambda Literary Award for Best Transgender Fiction and received an Honour of Distinction from The Writers’ Trust of Canada’s Dayne Ogilvie Prize for LGBTQ Emerging Writers. She lives in Windsor, Ontario. 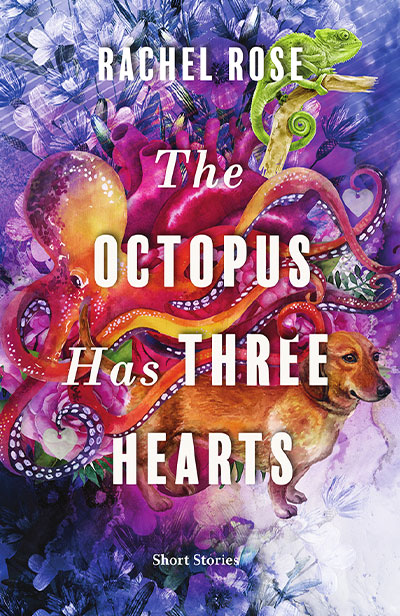 The Octopus Has Three Hearts by Rachel Rose

Rachel Rose is the author of four collections of poetry and a memoir, The Dog Lover Unit: Lessons in Courage from the World’s K9 Cops (St. Martin’s Press), which was shortlisted for the Arthur Ellis award for best non-fiction crime book in 2018. She is also the recipient of the Bronwen Wallace Award for fiction from The Writers’ Trust, the Pat Lowther Memorial Award, a 2014 and 2016 Pushcart Prize and a 2016 nomination for a Governor General’s Award. She is the Poet Laureate Emerita of Vancouver, poetry editor at Cascadia Magazine and a contributor for Maisonneuve Magazine. Rose’s work has appeared in numerous anthologies and publications including The Globe & Mail, American Poetry Review, Poetry, Malahat Review, Rattle, New Quarterly, Best Canadian Poetry, Monte Cristo Magazine and the Vancouver Sun. She lives in Vancouver, BC. 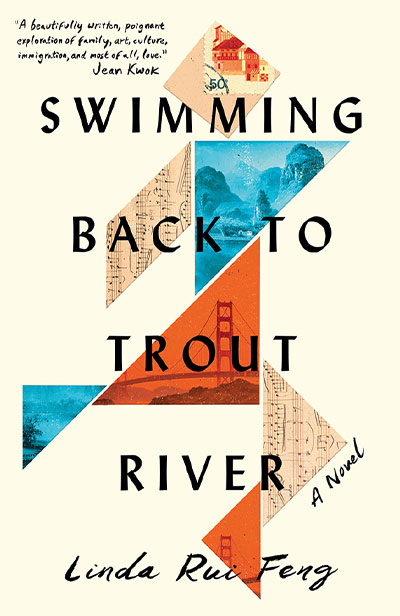 Swimming Back to Trout River by Linda Rui Feng

Born in Shanghai, Linda Rui Feng has lived in San Francisco, New York, and Toronto. She is a graduate of Harvard and Columbia Universities and is currently a professor of Chinese cultural history at the University of Toronto. She has been twice awarded a MacDowell Fellowship for her fiction, and her prose and poetry have appeared in journals such as The Fiddlehead, Kenyon Review Online, Santa Monica Review, and Washington Square Review. Swimming Back to Trout River is her first novel. 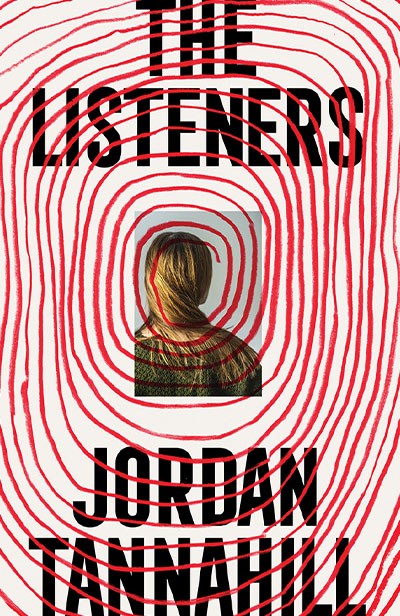 The Listeners by Jordan Tannahill

JORDAN TANNAHILL is an internationally acclaimed playwright who was born in Ottawa and is currently based in London (UK). Two of his plays have won a Governor General’s Literary Award for Drama. He has written one previous novel, Liminal, which was published to much acclaim and named one of the best Canadian novels of 2018 by CBC Books. CBC Arts named him as “one of sixty-nine LGBTQ Canadians, living or deceased, who has shaped the country’s history.” He is a regular columnist on CBC Radio’s The Next Chapter. 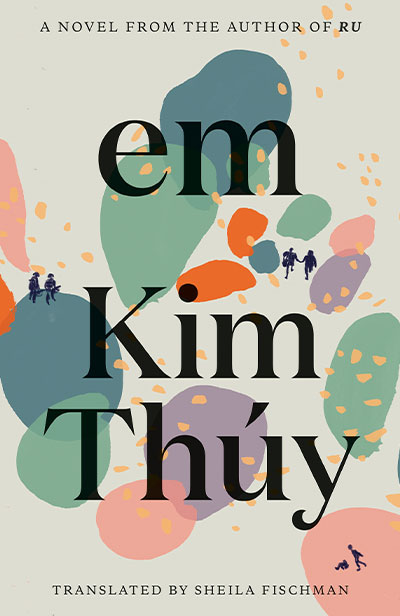 Born in Saigon in 1968, KIM THÚY left Vietnam with the boat people at the age of ten and settled with her family in Quebec. A graduate in translation and law, she has worked as a seamstress, interpreter, lawyer, restaurant owner, media personality and television host. She lives in Montreal and devotes herself to writing.

SHEILA FISCHMAN is the award-winning translator of some 200 contemporary novels from Quebec. In 2008, she was awarded the Molson Prize in the Arts. She is a Member of the Order of Canada and a chevalier of the Ordre national du Québec. She lives in Montreal. 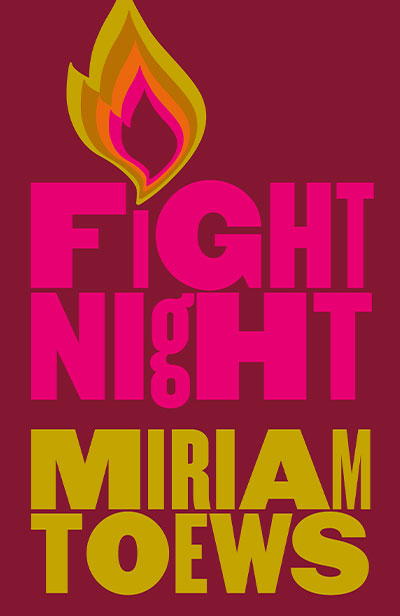 MIRIAM TOEWS is the author of seven previous, bestselling novels: Women Talking, All My Puny Sorrows, The Flying Troutmans, Irma Voth, A Complicated Kindness, A Boy of Good Breeding, and Summer of My Amazing Luck, and one work of non-fiction, Swing Low: A Life. Her books have been widely published internationally, and adapted for stage and film. Among other honours, she is the winner of the Governor General’s Literary Award for Fiction, the Libris Award for Fiction Book of the Year, the Writers’ Trust Fiction Prize, and the Writers’ Trust Marian Engel/ Timothy Findley Award. She lives in Toronto. 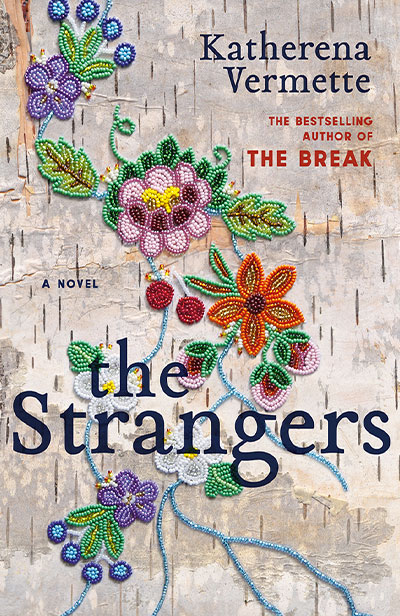 The Strangers by Katherena Vermette

KATHERENA VERMETTE (she/her) is a Red River Métis (Michif) writer from Treaty 1 territory, the heart of the Métis nation—Winnipeg, Manitoba, Canada. Her first book, North End Love Songs, won the 2013 Governor General’s Literary Award for Poetry. Her first novel, The Break, was a national bestseller and won several 2017 awards, including the Amazon First Novel Award, Margaret Laurence Award for Fiction, Carol Shields Winnipeg Book Award, and McNally Robinson Book of the Year. She lives with her family in a cranky old house within skipping distance of the temperamental Red River. The Strangers is her second novel. 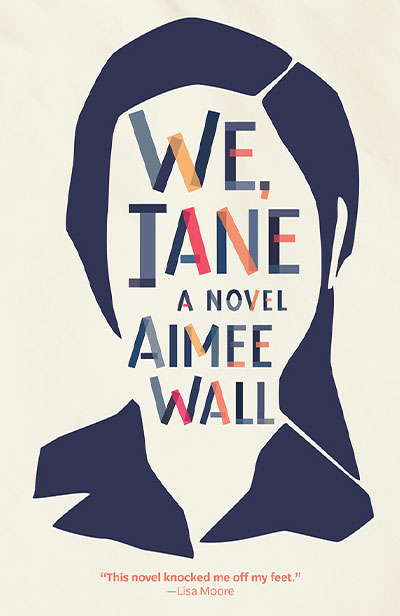 We, Jane by Aimee Wall

Newfoundland-native Aimee Wall is a writer and translator. Her essays, short fiction, and criticism have appeared in numerous publications, including Maisonneuve, Matrix Magazine, the Montreal Review of Books, and Lemon Hound. Wall’s translations include Vickie Gendreau’s novels Testament (2016), and Drama Queens (2019), and Sports and Pastimes by Jean-Philippe Baril Guérard (2017). She lives in Montreal. We, Jane is her first novel.

In a year of logistical challenges and the continued relevance of Zoom, the jury of the 2021 Scotiabank Giller Prize has emerged from many hours of private reading and many rounds of lively debate with a longlist of twelve titles. This extraordinary dozen showcases an ecstatic diversity of voices and styles, of narrative deployment and moral urgency, of formal innovation and old-fashioned storytelling pleasure. There is something for everyone on this list, but within each of these books there is to be found beauty, honest reckoning, human compassion, and the irrefutable mark of the sublime. It was the jury’s great honor to delight in the manifold achievements of these books, and with their announcement we leave this debate settled for another year: Canada’s literature is as vibrant and expansive as ever.

The Scotiabank Giller Prize is pleased to announce the award-winning, five-member jury panel for the 2021 Prize. 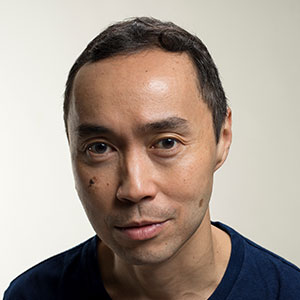 Tash Aw was born in Taiwan to Malaysian parents and grew up in Kuala Lumpur. He moved to England in his teens and studied Law at the University of Cambridge and Warwick. After working as a lawyer for four years, he studied Creative Writing at the University of East Anglia. His first novel, The Harmony Silk Factory (2005), won the 2005 Whitbread First Novel Award, and the Commonwealth Writers Prize (South East Asia and South Pacific Region Best First Book). His subsequent novels include Map of the Invisible World (2009) and Five Star Billionaire (2013). In 2019, Aw published We, the Survivors, with Fourth Estate. His work of short fiction Sail won the O. Henry Prize in 2013 and he has been published in A Public Space and the landmark Granta 100, amongst others.
Close 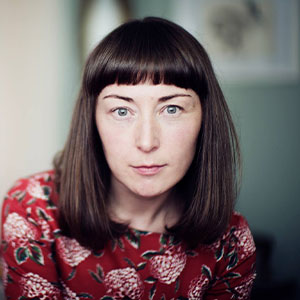 Megan Gail Coles is a graduate of Memorial University of Newfoundland, National Theatre School of Canada and University of British Columbia. She is the Co-Founder and Artistic Director of Poverty Cove Theatre Company for whom she has written numerous award-winning plays. Her debut short fiction collection, Eating Habits of the Chronically Lonesome, won the BMO Winterset Award, the ReLit Award, the Margaret and John Savage First Book Award and earned her the Writers’ Trust of Canada 5×5 Prize. Her debut novel, Small Game Hunting at the Local Coward Gun Club, was a finalist for the Scotiabank Giller Prize, a contender for CBC Canada Reads and recently won the BMO Winterset Award. Originally from Savage Cove on the Great Northern Peninsula of Newfoundland, Megan lives in St. John’s where she is the Executive Director of Riddle Fence and a PhD candidate at Concordia University. Megan’s debut poetry collection is forthcoming from House of Anansi this fall.
Close 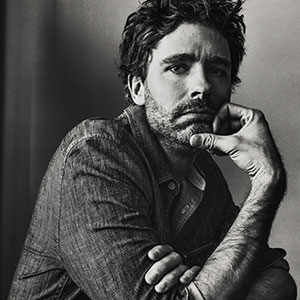 Joshua Ferris is the author of three previous novels, Then We Came to the End, The Unnamed and To Rise Again at a Decent Hour, and a collection of stories, The Dinner Party. He was a finalist for the National Book Award, winner of the Barnes and Noble Discover Award and the PEN/Hemingway Award, and was named one of The New Yorker’s “20 Under 40” writers in 2010. To Rise Again at a Decent Hour won the Dylan Thomas Prize and was shortlisted for the Booker Prize. His short stories have appeared in The New Yorker, Granta, and Best American Short Stories. Ferris lives in New York.
Close 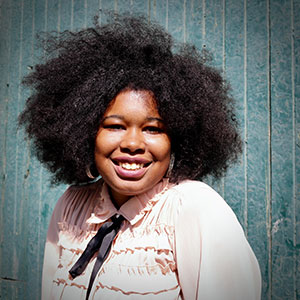 Zalika Reid Benta is a Toronto-based writer. Her debut short story collection Frying Plantain won the 23rd annual Danuta Gleed Literary Award and the 2020 Kobo Emerging Writer Prize in literary fiction. Frying Plantain was shortlisted for the 2020 Toronto Book Awards, the 2020 Trillium Book Award and longlisted for the 2019 Scotiabank Giller Prize. The collection is currently nominated for the 2021 White Pine Award and was shortlisted for the Forest of Reading Evergreen Award presented by the Ontario Library Association. Reid Benta is also the winner of the 2019 Byblacks People’s Choice Awards for Best Author. Frying Plantain has been on numerous “must read” lists from Buzzfeed, Bustle, Refinery29, Chatelaine Magazine, Toronto Star and The Globe and Mail, and was also listed as one of Indigo’s 50 “Best Books of 2019”. Reid Benta was the June 2019 Writer in Residence for Open Book and she was listed in CBC’s “6 Canadian Writers to Watch in 2019”. She received an MFA in fiction from Columbia University, was the 2019 John Gardner Fiction Fellow at the Breadloaf Writers’ Conference and is an alumnus of the 2017 Banff Writers’ Studio. She is currently working on a young-adult fantasy novel drawing inspiration from Jamaican folklore.
Close 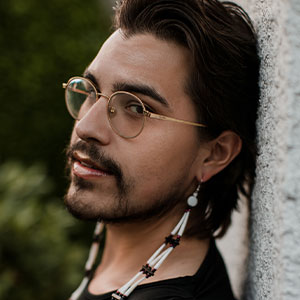 Joshua Whitehead is a Two-Spirit, Oji-nêhiyaw member of Peguis First Nation (Treaty 1). He is the author of full-metal indigiqueer (Talonbooks 2017) which was shortlisted for the inaugural Indigenous Voices Award and the Stephan G. Stephansson Award for Poetry. He is also the author of Jonny Appleseed (Arsenal Pulp Press 2018) which was longlisted for the Scotiabank Giller Prize, shortlisted for the Indigenous Voices Award, the Governor General’s Literary Award, the Amazon Canada First Novel Award and the Carol Shields Winnipeg Book Award. It won the Lambda Literary Award for Gay Fiction and the Georges Bugnet Award for Fiction. Whitehead is currently working on a third manuscript titled, Making Love with the Land to be published with Knopf Canada, which explores the intersections of Indigeneity, queerness, and, most prominently, mental health through a nêhiyaw lens. His work has been published in such venues as Prairie Fire, CV2, EVENT, Arc Poetry Magazine, The Fiddlehead, Grain, CNQ, Write, and Red Rising Magazine.
Close

Learn about upcoming events and announcements from the Scotiabank Giller Prize.