Suzette Mayr is the Winner of the 2022 Scotiabank Giller Prize 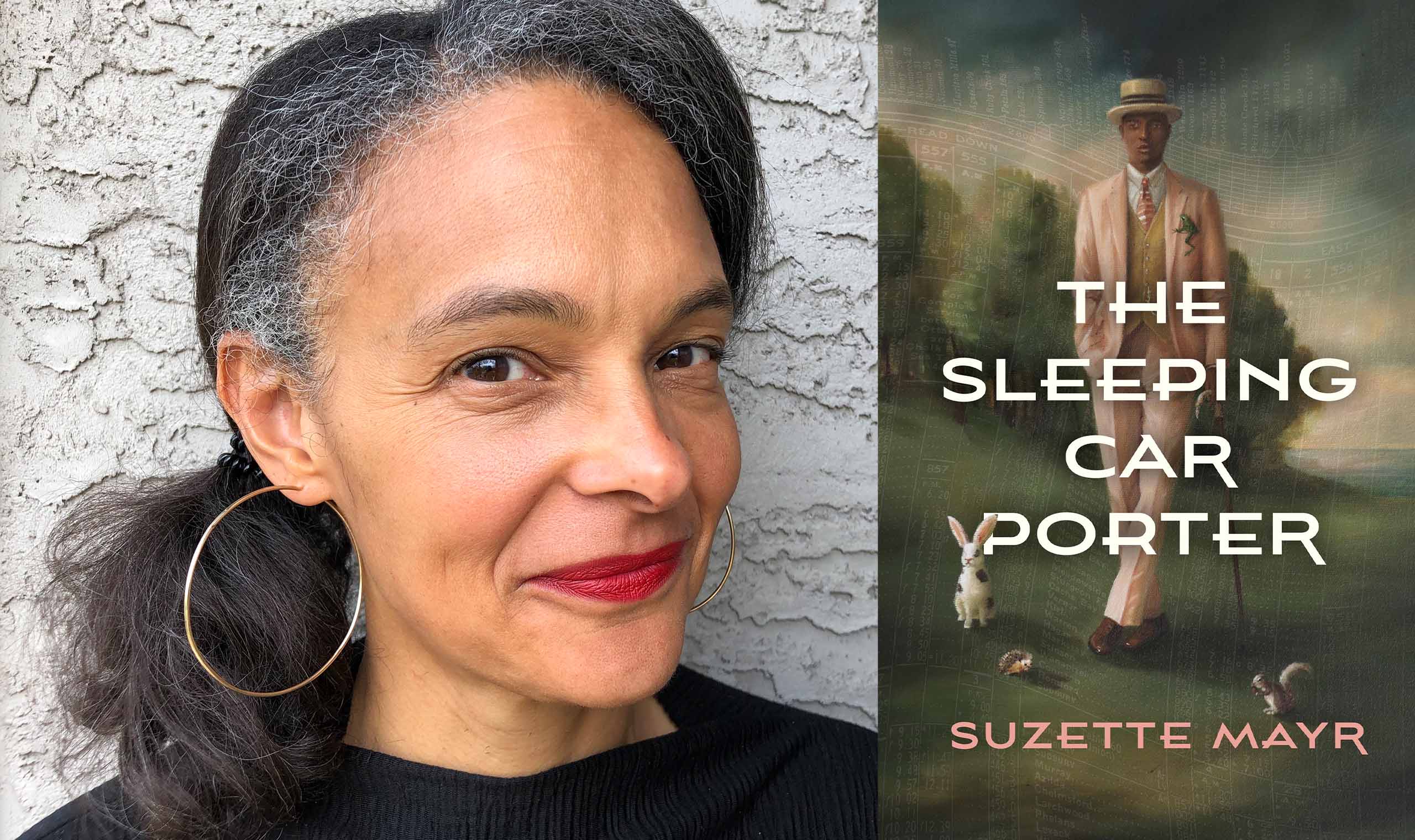 November 7, 2022 (Toronto, Ontario) – Suzette Mayr has been named the winner of the 2022 Scotiabank Giller Prize for her novel, The Sleeping Car Porter, published by Coach House Books, taking home $100,000 courtesy of Scotiabank.

The announcement was made at a black-tie dinner and award ceremony hosted by poet, artist and performer Rupi Kaur and award-winning actor Sarah Gadon, attended by over 300 guests. The gala was broadcast live commercial-free presented by Scotia Wealth Management on CBC, CBC Radio One, and streamed live on CBCBooks.ca.

This year, the Prize celebrates its 29th anniversary.

The remaining finalists, listed below, will each receive $10,000:

The longlist, shortlist, and winner of the 2022 Scotiabank Giller Prize were selected by an esteemed five-member jury panel: Canadian authors Kaie Kellough, Casey Plett (Jury Chair), and Waubgeshig Rice, joined by American authors Katie Kitamura and Scott Spencer. On September 6, the jury narrowed down the 138 submitted works to 14 to create the longlist. The shortlist of five was selected on September 27. And just this very morning, the jury met to choose tonight’s winner.

“Suzette Mayr brings to life –believably, achingly, thrillingly –a whole world contained in a passenger train moving across the Canadian vastness, nearly one hundred years ago. As only occurs in the finest historical novels, every page in The Sleeping Car Porter feels alive and immediate –and eerily contemporary. The sleeping car porter in this sleek, stylish novel is named R.T. Baxter –called George by the people upon whom he waits, as is every other Black porter. Baxter’s dream of one day going to school to learn dentistry coexists with his secret life as a gay man, and in Mayr’s triumphant novel we follow him not only from Montreal to Calgary, but into and out of the lives of an indelibly etched cast of supporting characters, and, finally, into a beautifully rendered radiance.”

Suzette Mayr is the author of the novels Dr. Edith Vane and the Hares of Crawley Hall, Monoceros, Moon Honey, The Widows, and Venous Hum. The Widows was shortlisted for the Commonwealth Writers’ Prize for Best Book in the Canada-Caribbean region, and has been translated into German. Moon Honey was shortlisted for the Writers’ Guild of Alberta’s Best First Book and Best Novel Awards. Monoceros won the ReLit Award, the City of Calgary W. O. Mitchell Book Prize, was longlisted for the 2011 Giller Prize, and shortlisted for a Ferro-Grumley Award for LGBT Fiction, and the Georges Bugnet Award for Fiction. She and her partner live in a house in Calgary close to a park teeming with coyotes.

Listen to CBC Radio’s q tomorrow for an interview with Suzette Mayr and relive the gala at CBCBooks.ca.

Ask the author your questions about her book during a live Twitter chat hosted by @GillerPrize on Thursday, November 10, at 2 p.m. ET using the hashtag #GillerWinner.

Images from tonight’s gala will be available on the Media Resources page at www.scotiabankgillerprize.ca

“Suzette Mayr’s magnificent and powerful work of fiction inspired this year’s jury to select her as the 2022 Scotiabank Giller Prize winner and cements her reputation as a world-class writer. Heartiest congratulations to Suzette on her win tonight!”
Elana Rabinovitch, Executive Director, Scotiabank Giller Prize

“Congratulations to Suzette Mayr for winning the 2022 Scotiabank Giller Prize. Scotiabank is proud that our partnership with the Scotiabank Giller Prize, which began in 2005, has helped raise the profile of Canada’s top literary talent at home and abroad. Thank you to the jury for taking on the challenge of selecting tonight’s winner from an outstanding group of authors. Congratulations again to Suzette, and to all of the short- and longlisted authors. Your stories have inspired and enriched readers from coast-to-coast-to-coast.”
Laura Curtis Ferrera, Chief Marketing Officer, Scotiabank

The winner of the 2022 Scotiabank Giller Prize will join the Guadalajara International Book Fair for a celebratory event on November 30, 2022, at the World Trade Center Guadalajara.

The winner of the Scotiabank Giller Prize will also be honoured with an in-person interview as part of the 2023 San Miguel Writer’s Conference & Literary Festival, on February 16, 2023. Other notable interviews have included both Tom Hanks and Matthew McConaughey, along with Margaret Atwood, Isabel Allende, Isabel Wilkerson, Emma Donoghue, and many more.

About the Prize
The Giller Prize, founded by Jack Rabinovitch in 1994, highlights the very best in Canadian fiction year after year. In 2005, the prize teamed up with Scotiabank who increased the winnings four-fold. The Scotiabank Giller Prize now awards $100,000 annually to the author of the best Canadian novel, graphic novel or short story collection published in English, and $10,000 to each of the finalists. The award is named in honour of the late literary journalist Doris Giller by her husband Toronto businessman Jack Rabinovitch, who passed away in August 2017.

About Scotiabank
Scotiabank is a leading bank in the Americas. Guided by our purpose: “for every future”, we help our customers, their families and their communities achieve success through a broad range of advice, products and services, including personal and commercial banking, wealth management and private banking, corporate and investment banking, and capital markets. With a team of over 90,000 employees and assets of approximately $1.3 trillion (as at July 31, 2022), Scotiabank trades on the Toronto Stock Exchange (TSX: BNS) and New York Stock Exchange (NYSE: BNS). For more information, please visit http://www.scotiabank.com and follow us on Twitter @Scotiabank.

About Audible, Inc.
Audible, Inc., an Amazon.com, Inc. subsidiary (NASDAQ:AMZN), is a leading creator and provider of premium audio storytelling, offering customers a new way to enhance and enrich their lives every day. Audible.ca content includes more than 750,000 audiobooks, podcasts, and Audible Originals. Audible has millions of members around the world who subscribe to one of 11 localized services designed for customers in Australia, Canada, France, Germany, India, Italy, Japan, Spain, the UK, and the US. Audible members download nearly 4 billion hours of content annually and listen across a wide range of supported devices.

About Indigo Books & Music Inc.
Indigo is a publicly traded Canadian company listed on the Toronto Stock Exchange (IDG). Indigo is Canada’s leading book and lifestyle retailer, offering a curated assortment of books, gifts, baby, kids, wellness and lifestyle products, that support their customers every day and at key life stages by simplifying their journey to live with intention. Indigo believes in real books, in living life fully and generously, in being kind to each other and that stories – big and little – connect us.

The Company supports a separate registered charity, called the Indigo Love of Reading Foundation (the “Foundation”), which is committed to addressing educational inequality, and more specifically the literacy crisis in Canada. The Foundation runs two annual national granting programs: the Literacy Fund Grant, which is a multi-year grant provided to high-needs schools across the country; and the Adopt a School program, a grassroots fundraising initiative that unites Indigo, its retail stores, Indigo’s staff, local schools, and their communities. In the wake of the COVID-19 pandemic and the unprecedented nation-wide school closures, the Foundation committed $1.0 million to provide books to families in need. With the support of the Company, its customers, employees, and suppliers, the Foundation has committed over $35.0 million to more than 3,500 high-needs elementary schools across Canada since 2004. The Foundation is dedicated to raising awareness about the critical importance of children’s literacy while providing essential literary support to high-needs children across Canada.

To learn more about Indigo, please visit the “Our Company” section at indigo.ca.