Skip to content
The Scotiabank Giller Prize Presents its 2022 Longlist 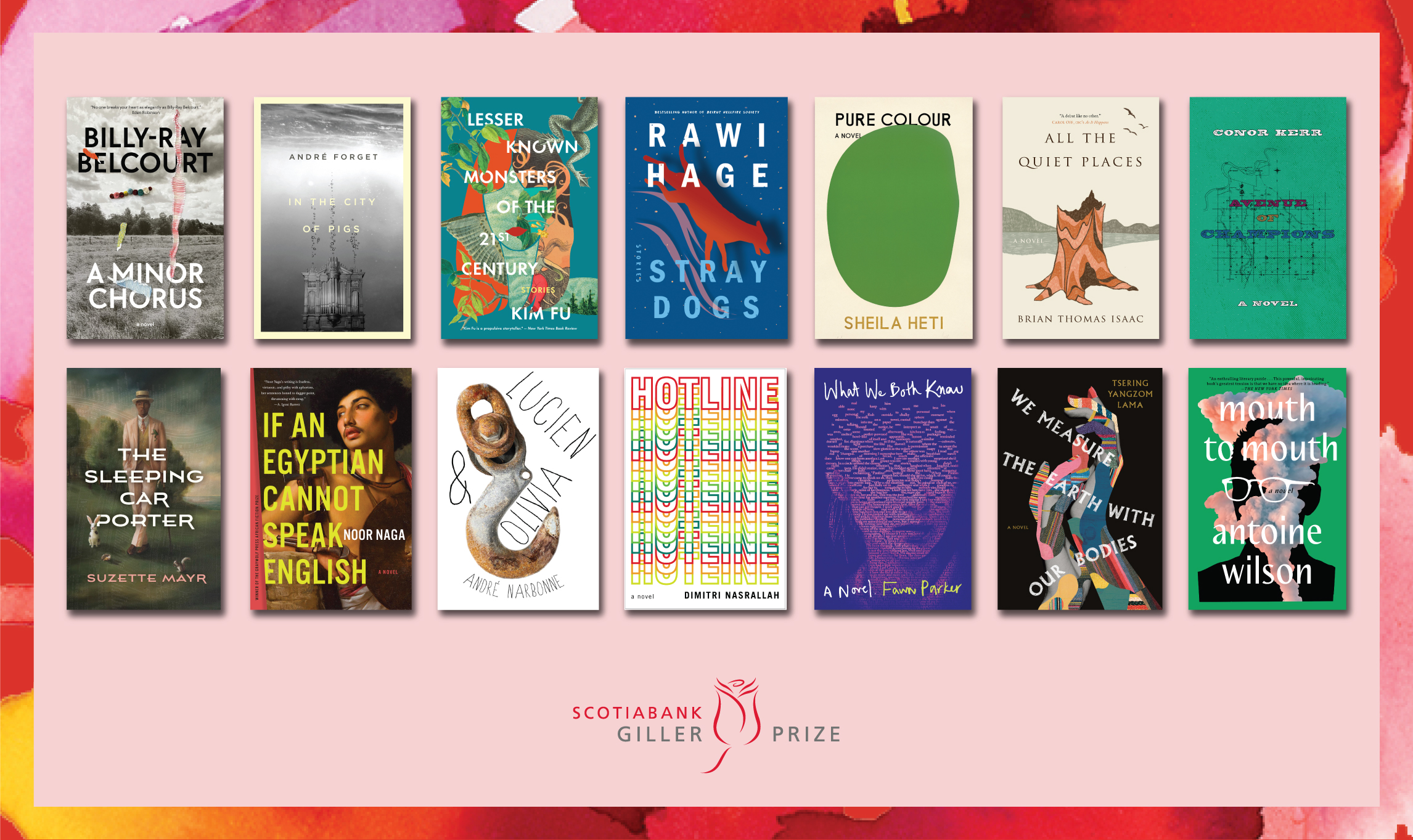 Now in its 29th year, the Scotiabank Giller Prize highlights the very best of Canadian fiction. This year, 138 works of literature were submitted for consideration by publishers across Canada, with the longlist narrowed down to 14 titles.

The authors and titles named to the 2022 Scotiabank Giller Prize longlist are:

Each judge was given access to a complimentary Audible™ account, providing an opportunity to listen to the submissions that were available on Audible’s service.

As the world roils and rolls on in this strange new decade, the 2022 Scotiabank Giller Prize jury can report that Canadian fiction is only becoming more bountiful, energetic, meaningful, funny, and moving. The jury’s discussions and debates throughout the year were nuanced and spirited, but most of all we were continuously in awe of the cornucopia presented to us. We are proud to showcase a longlist of fourteen outstanding titles that are sweeping in scope, touch all corners of life, and which provide pleasure and stimulation as well as urgency and depth. To the nominated authors, it is our delight and honour to say: Congratulations, and thank you.

“The jury read nearly 140 books this year to create an expansive longlist with exceptional narrative energy and range. They met the challenge with verve, precision, humour, and determination. The list shows yet again that Canadian fiction writers are punching well above their weight class.” -Elana Rabinovitch, Executive Director, Scotiabank Giller Prize

“Congratulations to the 2022 Scotiabank Giller Prize longlisted authors. Canadian literature continues to thrive and stand out across the globe. As part of our long history of celebrating the arts, Scotiabank is proud to support the immense talent of Canadian literary artists. These 14 authors are an inspiring group that showcase a wide array of perspectives and experiences of Canadians from coast to coast to coast.” -Laura Curtis Ferrera, Chief Marketing Officer, Scotiabank

Watch the 2022 Scotiabank Giller Prize on Monday, November 7, at 9 p.m. ET on CBC TV and the free CBC Gem streaming service, with a livestream also available on cbcbooks.ca/gillerprize. Listeners can tune into a broadcast special on CBC Radio One and CBC Listen.

About the Prize
The Giller Prize, founded by Jack Rabinovitch in 1994, highlights the very best in Canadian fiction year after year. In 2005, the prize teamed up with Scotiabank who increased the winnings 4-fold. The Scotiabank Giller Prize now awards $100,000 annually to the author of the best Canadian novel, graphic novel or short story collection published in English, and $10,000 to each of the finalists. The award is named in honour of the late literary journalist Doris Giller by her husband Toronto businessman Jack Rabinovitch, who passed away in August 2017.

About Scotiabank
Scotiabank is a leading bank in the Americas. Guided by our purpose: “for every future”, we help our customers, their families and their communities achieve success through a broad range of advice, products and services, including personal and commercial banking, wealth management and private banking, corporate and investment banking, and capital markets. With a team of over 90,000 employees and assets of approximately $1.3 trillion (as at July 31, 2022), Scotiabank trades on the Toronto Stock Exchange (TSX: BNS) and New York Stock Exchange (NYSE: BNS). For more information, please visit http://www.scotiabank.com and follow us on Twitter @Scotiabank.

About Audible, Inc.
Audible, Inc., an Amazon.com, Inc. subsidiary (NASDAQ:AMZN), is a leading creator and provider of premium audio storytelling, offering customers a new way to enhance and enrich their lives every day. Audible.ca content includes more than 750,000 audiobooks, podcasts, and Audible Originals. Audible has millions of members around the world who subscribe to one of 11 localized services designed for customers in Australia, Canada, France, Germany, India, Italy, Japan, Spain, the UK, and the US. Audible members download nearly 4 billion hours of content annually and listen across a wide range of supported devices.