Esi Edugyan is the Winner of the 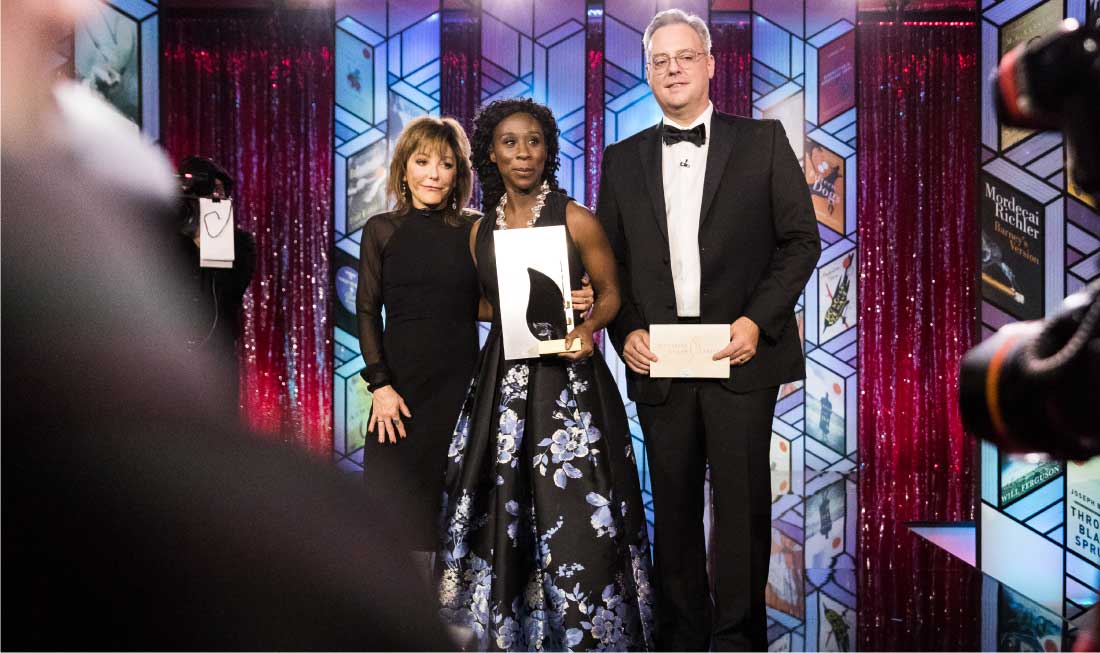 Esi Edugyan has been named the winner of the $100,000 Scotiabank Giller Prize for her novel Washington Black, published by Patrick Crean Editions. The announcement was made this evening at a black-tie dinner and award ceremony hosted by Canadian comedian, television personality and author Rick Mercer and attended by nearly 500 members of the publishing, media and arts communities. The gala was broadcast and streamed live on CBC, the CBC streaming app, CBC Radio One and CBCBooks.ca.

This year the Prize celebrates its 25th anniversary.

The shortlist of five authors and their books, announced on October 1, 2018, included:

“How often history asks us to underestimate those trapped there. This remarkable novel imagines what happens when a black man escapes history’s inevitable clasp – in his case, in a hot air balloon no less. Washington Black, the hero of Esi Edugyan’s novel is born in the 1800s in Barbados with a quick mind, a curious eye, and a yearning for adventure. In conjuring Black’s vivid and complex world – as cruel empires begin to crumble and the frontiers of science open like astounding vistas – Edugyan has written a supremely engrossing novel about friendship and love and the way identity is sometimes a far more vital act of imagination than the age in which one lives.”

Esi Edugyan won the Scotiabank Giller Prize in 2011 for her novel Half-Blood Blues. The novel was a finalist for the Man Booker Prize, the Governor General’s Literary Award for Fiction, the Rogers Writers’ Trust Fiction Prize and the Orange Prize for Fiction. The author lives in Victoria, BC.

Listen to CBC Radio’s q tomorrow at 10 a.m. ET for an interview with Esi Edugyan and relive the gala on the CBC streaming app and at CBCBooks.ca.

Ask the author your questions about her book during a live Twitter chat hosted by @GillerPrize on November 22 at 2:00 p.m. ET using the hashtag #GillerWinner.

Images from tonight’s gala will be available on the media resources page.

“I could not be more delighted for Esi Edugyan and her tour de force of a novel. This year’s list was full of wit, warmth, audacity and superhero storytelling powers. The books display how far Canadian literature and Canadian writers have come in the last 25 years. The Scotiabank Giller Prize is proud to be a part of that evolution.”
– Elana Rabinovitch, Executive Director, Scotiabank Giller Prize

“Congratulations to Esi Edugyan for winning the Scotiabank Giller Prize. As an organization, Scotiabank is proud to support Canada’s talented fiction writers through the Scotiabank Giller Prize, especially as we celebrate its 25th anniversary. Scotiabank has a deep commitment to supporting the arts in Canada. We recognize that great stories enrich our communities and our lives in meaningful ways. On behalf of all Scotiabankers, congratulations again to Esi Edugyan and to all of the short and longlisted authors. Thank you for challenging us to see the world from different perspectives and inspiring us to pursue our own passions.”
– John Doig, Executive Vice President and Chief Marketing Officer, Scotiabank

Audible, the world’s largest creator and distributor of audiobooks, is committed to supporting talented Canadian authors and narrators and is proud to be the exclusive audiobook sponsor of the Scotiabank Giller Prize.

The winner of the Scotiabank Giller Prize will be given an opportunity to explore, expand, and develop their practice during a two-week, self-directed residency in Banff Centre for Arts and Creativity’s exclusive Leighton Artists’ Studios. Located on Treaty 7 territory in Banff National Park, Banff Centre is Canada’s largest post graduate arts and leadership training institute (banffcentre.ca).

Cineplex is a proud sponsor of the Scotiabank Giller Prize and its support of excellence in Canadian literary talent.

The Giller Prize, founded by Jack Rabinovitch in 1994, highlights the very best in Canadian fiction year after year. In 2005, the prize teamed up with Scotiabank who increased the winnings 4-fold. The Scotiabank Giller Prize now awards $100,000 annually to the author of the best Canadian novel or short story collection published in English, and $10,000 to each of the finalists. The award is named in honour of the late literary journalist Doris Giller by her husband Toronto businessman Jack Rabinovitch, who passed away in August 2017.

Scotiabank is Canada’s international bank and a leading financial services provider in the Americas. We are dedicated to helping our 25 million customers become better off through a broad range of advice, products and services, including personal and commercial banking, wealth management and private banking, corporate and investment banking, and capital markets. With a team of more than 96,000 employees and assets of $947 billion (as at July 31, 2018), Scotiabank trades on the Toronto Stock Exchange (TSX: BNS) and New York Stock Exchange (NYSE: BNS). For more information, please visit www.scotiabank.com and follow us on Twitter @Scotiabankviews.

CBC/Radio-Canada is Canada’s national public broadcaster. Through our mandate to inform, enlighten and entertain, we play a central role in strengthening Canadian culture. As Canada’s trusted news source, we offer a uniquely Canadian perspective on news, current affairs and world affairs. Our distinctively homegrown entertainment programming draws audiences from across the country. Deeply rooted in communities, CBC/Radio-Canada offers diverse content in English, French and eight Indigenous languages. We are leading the transformation to meet the needs of Canadians in a digital world.

Proudly recognized as having one of the country’s Most Admired Corporate Cultures, Cineplex employs approximately 13,000 people in its offices across Canada and the United States. To learn more visit Cineplex.com or download the Cineplex App.

Founded in 1933, Banff Centre for Arts and Creativity is a learning organization built upon an extraordinary legacy of excellence in artistic and creative development. What started as a single course in drama has grown to become the global organization leading in arts, culture, and creativity across dozens of disciplines. From our home in the stunning Canadian Rocky Mountains, Banff Centre for Arts and Creativity aims to inspire everyone who attends our campus – artists, leaders, and thinkers – to unleash their creative potential and realize their unique contribution to society through cross-disciplinary learning opportunities, world-class performances, and public outreach.