Skip to content
The Scotiabank Giller Prize Presents its 2020 Shortlist 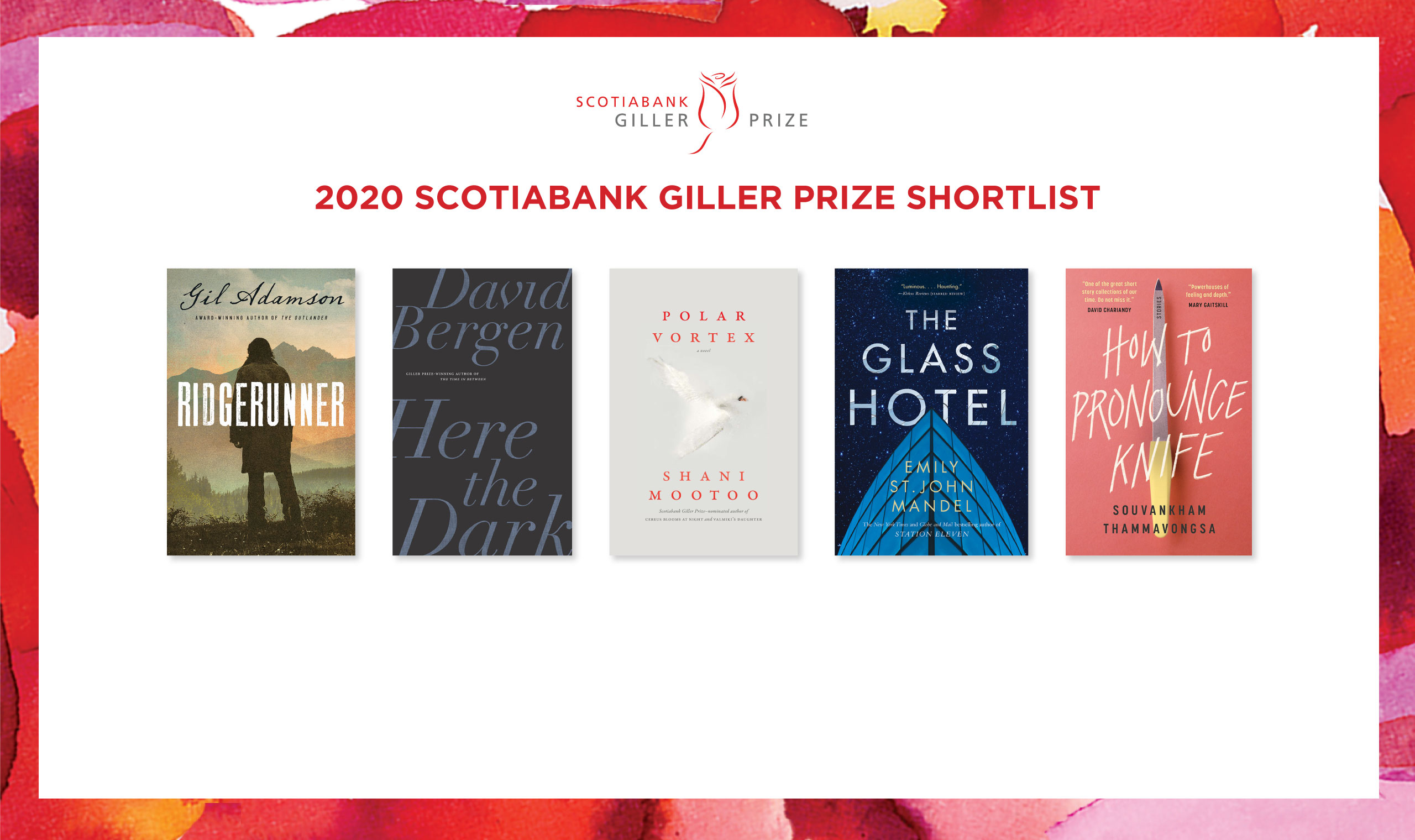 October 5, 2020 (Toronto, ON) – Today, the Scotiabank Giller Prize shortlist was announced, celebrating five Canadian fiction writers and the 27th edition of the Prize.

The authors named to the 2020 Scotiabank Giller Prize shortlist are:

Read the jury citations here about each of the shortlisted authors.

CBC is pleased to announce that Canadian actor, Eric McCormack will host the Scotiabank Giller Prize broadcast on November 9, 2020, which will feature a performance by Canadian jazz pianist and singer, Diana Krall. The broadcast will be presented commercial-free courtesy of Scotia Wealth Management.

“Nowhere is the need for reflections on the human condition more pressing than now. This year’s shortlist is bursting with stories of belonging, relationships, dislocation, economic ruin and rites of passage. 2020 will go down in history not just as the year of COVID but the year Canadian writers hit their literary stride.”
– Elana Rabinovitch, Executive Director, Scotiabank Giller Prize

Between the Pages: An Evening with the Scotiabank Giller Prize Finalists will take place digitally this fall, on Monday, November 2, at 7:30 p.m. ET on www.scotiabankgillerprize.ca/live, Facebook, YouTube and Twitter. Hosted by Jael Richardson, it will be an hour of readings, questions and answers, and will take you inside the minds and creative lives of the writers on the 2020 shortlist. For more information, please visit: www.scotiabankgillerprize.ca/news-events/events-and-important-dates/

Eric McCormack
Known for his portrayal of Will Truman, on NBC’s Will and Grace, McCormack has earned six Golden Globe nominations, a Screen Actors Guild award and the Emmy for Lead Actor in a Comedy Series. He recently received a star on Hollywood’s Walk of Fame, and an honorary doctorate from Ryerson University, his Toronto alma mater. McCormack spent his 20’s in theatres across Canada, including five seasons with the Stratford Shakespearean Theatre. On Broadway, he has starred in Tony-nominated productions of The Music Man and Gore Vidal’s The Best Man. His many television series include Lonesome Dove, Trust Me and Perception and he is a producer, director and star of the Netflix hit Travelers. He and his wife, who along with their son, Finnigan, divide their time between Los Angeles and Vancouver and are active in many American and Canadian charities.

Diana Krall
Touted as the hottest pianist/singer/songwriter on the contemporary U.S. jazz scene, Krall grew up in a musical family in British Columbia. In the 1980s, she won a scholarship to Boston’s Berklee School of Music. She later studied with Jimmy Rowles in LA and jazz pianist Don Thompson in Toronto. Two albums, Stepping Out (1993) and Only Trust Your Heart (1995) registered Krall’s presence on the scene. Her breakthrough album, All for You, a tribute to Nat King Cole, spent 70 weeks on the Billboard Top 10 Traditional Jazz charts and earned her a Grammy Best Jazz Vocalist nomination. She followed with Love Scenes (1997), also nominated for a Grammy, which became the first jazz album to be certified platinum in Canada. With the release of When I Look in Your Eyes in 1999, Krall followed the well-trodden path of the chanteuse by ditching her traditional quartet backing and melded her voice to the sound of a lush orchestra. She is married to rocker Elvis Costello. Her new album This Dream Of You was released in 2020.

About the Prize
The Giller Prize, founded by Jack Rabinovitch in 1994, highlights the very best in Canadian fiction year after year. In 2005, the prize teamed up with Scotiabank who increased the winnings four-fold. The Scotiabank Giller Prize now awards $100,000 annually to the author of the best Canadian novel, short story collection, or graphic novel published in English, and $10,000 to each of the finalists. The award is named in honour of the late literary journalist Doris Giller by her husband Toronto businessman Jack Rabinovitch, who passed away in August 2017.

About Scotiabank
Scotiabank is a leading bank in the Americas. Guided by our purpose: “for every future”, we help our customers, their families and their communities achieve success through a broad range of advice, products and services, including personal and commercial banking, wealth management and private banking, corporate and investment banking, and capital markets. With a team of over 90,000 employees and assets of approximately $1.2 trillion (as at July 31, 2020), Scotiabank trades on the Toronto Stock Exchange (TSX: BNS) and New York Stock Exchange (NYSE: BNS). For more information, please visit our website and follow us on Twitter @ScotiabankViews.

About CBC/Radio-Canada
CBC/Radio-Canada is Canada’s national public broadcaster. Through our mandate to inform, enlighten and entertain, we play a central role in strengthening Canadian culture. As Canada’s trusted news source, we offer a uniquely Canadian perspective on news, current affairs and world affairs. Our distinctively homegrown entertainment programming draws audiences from across the country. Deeply rooted in communities, CBC/Radio-Canada offers diverse content in English, French and eight Indigenous languages. We also deliver content in Spanish, Arabic and Chinese, as well as both official languages, through Radio Canada International (RCI). We are leading the transformation to meet the needs of Canadians in a digital world.

About Audible, Inc.
Audible, the world’s largest creator and distributor of audiobooks, is committed to supporting talented Canadian authors and narrators and is proud to be the exclusive audiobook sponsor of the Scotiabank Giller Prize. Audible, Inc., an Amazon.com, Inc. subsidiary (NASDAQ: AMZN), is the leading provider of premium digital spoken audio content, offering customers a new way to enhance and enrich their lives every day. Audible was created to unleash the emotive music in language and the habituating power and utility of verbal expression. Audible content includes more than 375,000 audio programs from leading audiobook publishers, broadcasters, entertainers, magazine and newspaper publishers, and business information providers.