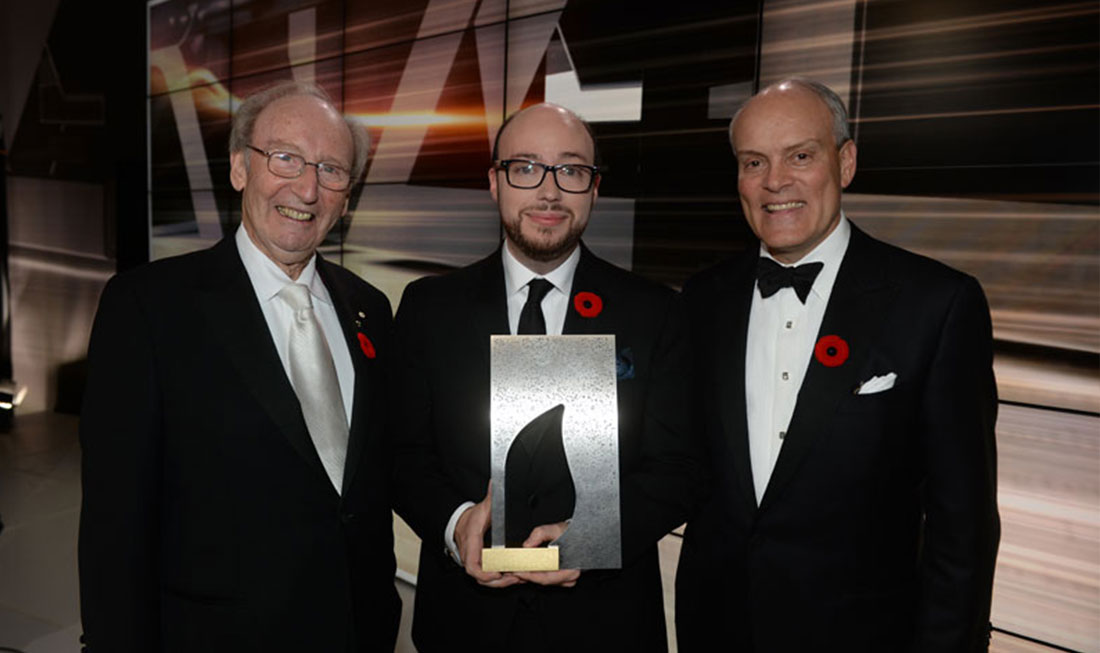 Sean Michaels has been named the winner of the 2014 Scotiabank Giller Prize for Us Conductors, published by Random House Canada. The announcement was made at a black-tie dinner and award ceremony hosted by Rick Mercer, attended by nearly 500 members of the publishing, media and arts communities. CBC Television is the broadcaster for the gala.

This year the prize celebrates its 21st anniversary.

A shortlist of six authors and their books was announced on October 6, 2014. Those finalists are:

“Michaels’ book is based on the life of Lev Thermen, the Russian-born inventor of the Theremin, the most ethereal of musical instruments. As the narrative shifts countries and climates, from the glittery brightness of New York in the 1920s to the leaden cold of the Soviet Union under Stalin, the grace of Michaels’s style makes these times and places seem entirely new. He succeeds at one of the hardest things a writer can do: he makes music seem to sing from the pages of a novel.”

Sean Michaels was born in Stirling, Scotland, in 1982. Raised in Ottawa, he eventually settled in Montreal, founding Said the Gramophone, one of the earliest music blogs. He has since spent time in Edinburgh and Krakow, written for the Guardian and McSweeney’s, toured with rock bands, searched the Parisian catacombs for Les UX, and received two National Magazine Awards.

Listen to CBC Radio One’s Q tomorrow at 10 a.m. / 10:30 NT for an interview with Sean Michaels and relive the gala on www.cbc.ca/books.

Ask the 2014 Scotiabank Giller Prize winner your questions on Twitter about his win on November 12 at 2 p.m. ET during a live Twitter chat hosted by @GillerPrize using the hashtag #GillerWinner.

The Scotiabank Giller Prize strives to highlight the very best in Canadian fiction year after year. Beginning in 2014, the prize will award $100,000 annually to the author of the best Canadian novel or short story collection published in English, and $10,000 to each of the finalists. The award is named in honour of the late literary journalist Doris Giller and was founded in 1994 by her husband, Toronto businessman Jack Rabinovitch.

Scotiabank is a leading financial services provider in over 55 countries and Canada’s most international bank. Through Bright Future, our global philanthropic program, Scotiabank and its employees support causes at a grassroots level across six pillars: health, education, social services, arts and culture, environment and sports. Recognized as a leader for charitable donations and philanthropic activities, Scotiabank has contributed on average some $50 million annually over the last five years to community causes around the world.

CBC/Radio-Canada is Canada’s national public broadcaster and one of its largest cultural institutions. The Corporation is a leader in reaching Canadians on new platforms and delivers a comprehensive range of radio, television, internet, and satellite-based services. Deeply rooted in the regions, CBC/Radio-Canada is the only domestic broadcaster to offer diverse regional and cultural perspectives in English, French and eight Aboriginal languages.

A space for us all is CBC/Radio-Canada’s new strategy to modernize the public broadcaster and ensure that it continues to fulfill its mandate for Canadians and for future generations. Through to 2020, it will increase its investment in prime time television programming, and continue to create radio programs of the highest quality, while promoting the development of digital and mobile platforms and content.

Home to Canada Reads, Writers & Company with Eleanor Wachtel, The Next Chapter with Shelagh Rogers, Canada Writes and the CBC Literary Prizes, CBC Books brings together literary enthusiasts to find books they want to read and to connect with other Canadians who love to read and write. For book news, writing challenges, reading lists, book recommendations and more, visit www.cbcbooks.ca.