Ian Williams is the Winner of the 2019 Scotiabank Giller Prize 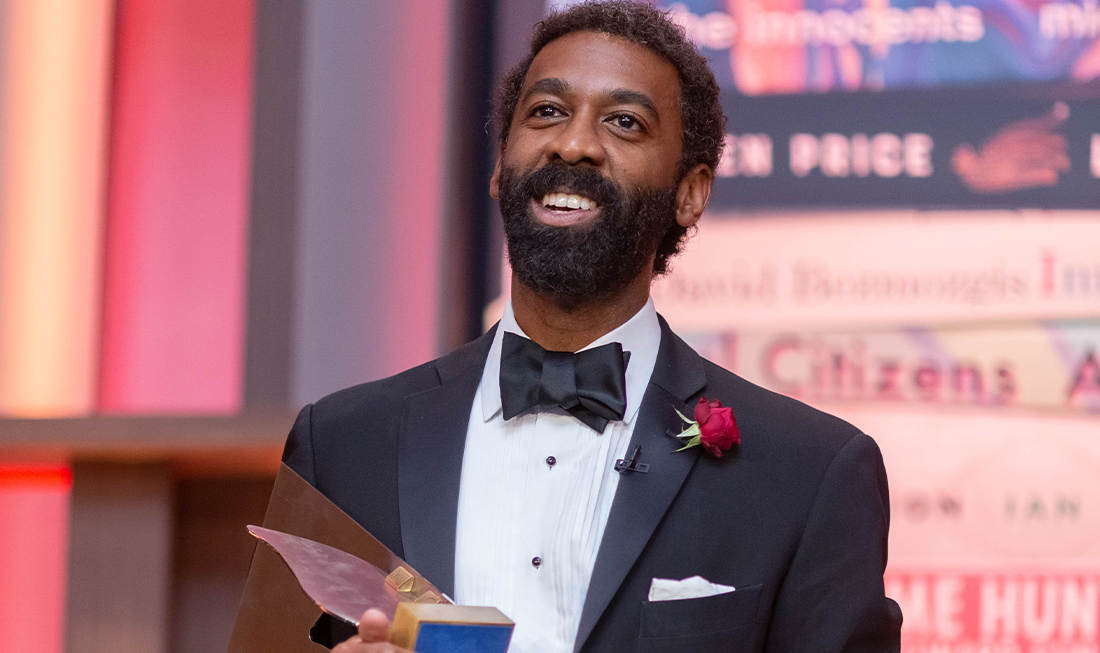 November 18, 2019 (Toronto, Ontario) – Ian Williams has been named the winner of the 2019 Scotiabank Giller Prize for his novel Reproduction, published by Random House Canada, taking home $100,000 courtesy of Scotiabank.

The announcement was made at a black-tie dinner and award ceremony hosted by Canadian singer-songwriter and actress Jann Arden and attended by 450 members of the publishing, media and arts communities. The gala was broadcast live commercial-free presented by Scotia Wealth Management on CBC, CBC Radio One and streamed live on CBCBooks.ca.

This year the Prize celebrates its 26th anniversary.

Ian Williams’s Reproduction is many things at once. It’s an engrossing story of disparate people brought together and also a masterful unfolding of unexpected connections and collisions between and across lives otherwise separated by race, class, gender and geography. It’s a pointed and often playful plotting out of individual and shared stories in the close spaces of hospital rooms, garages, mansions and apartments, and a symphonic performance of resonant and dissonant voices, those of persons wanting to impress, persuade, deny, or beguile others, and always trying again.

Ian Williams is the author of Personals, shortlisted for the Griffin Poetry Prize and the Robert Kroetsch Poetry Book Award; Not Anyone’s Anything, winner of the Danuta Gleed Literary Award for the best first collection of short fiction in Canada; and You Know Who You Are, a finalist for the ReLit Prize for poetry. He was named as one of ten Canadian writers to watch by CBC. Williams completed his Ph.D. in English at the University of Toronto and is currently an assistant professor of poetry in the Creative Writing program at the University of British Columbia. He was the 2014-2015 Canadian Writer-in-Residence for the University of Calgary’s Distinguished Writers Programme. He has held fellowships or residencies from the Banff Center, Vermont Studio Center, Cave Canem, Kimmel Harding Nelson Center for the Arts, and Palazzo Rinaldi in Italy. He was also a scholar at the National Humanities Center Summer Institute for Literary Study and was a judge for the 2018 Griffin prize. His writing has appeared in several North American journals and anthologies.

Listen to CBC Radio’s q tomorrow at 10 a.m. for an interview with Ian Williams and relive the gala at CBCBooks.ca.

Head to @Scotiabank on Instagram on November 19 for an Ask Me Anything with Ian.

Ask the author your questions about his book during a live Twitter chat hosted by @GillerPrize on Thursday, November 21 at 2 p.m. ET using the hashtag #GillerWinner.

Images from tonight’s gala will be available on the Media Resources page at www.scotiabankgillerprize.ca.

I couldn’t be happier for Ian. His novel resonated deeply with the jury, evoking time, place and character that only the best works of art can achieve. I feel confident that this book will continue to find an even larger and more devoted audience across Canada and throughout the world.
– Elana Rabinovitch, Executive Director, Scotiabank Giller Prize

“Congratulations to Ian Williams for winning the 2019 Scotiabank Giller Prize! Scotiabank is very proud to be a part of raising and advancing the profile of Canada’s best authors, both across our country and around the world. We know that they make Canadians richer, exposing us to new ideas. Congratulations again to Ian Williams, and to all of the short and longlisted authors. Your words have touched the lives of readers across Canada and around the world.”
– John Doig, Executive Vice President, Retail Distribution, Scotiabank

The winner of the Scotiabank Giller Prize will be honoured with a sit-down conversation and a reading at the 2020 San Miguel Writers’ Conference & Literary Festival, on February 13, 2020, the second day of the five-day event. The winner, along with past winner Madeleine Thien, who will be one of the keynote speakers, will join five other internationally acclaimed authors for a week of keynote speeches, workshops, readings and round tables.

The winner of the Scotiabank Giller Prize will be given an opportunity to explore, expand, and develop their practice during a two-week, self-directed residency in Banff Centre for Arts and Creativity’s exclusive Leighton Artists’ Studios. Located on Treaty 7 territory in Banff National Park, Banff Centre is Canada’s largest post graduate arts and leadership training institute (banffcentre.ca).

Air Canada is the official and exclusive airline of the 2019 Scotiabank Giller Prize. Air Canada’s sponsorship helped take the finalists across the country and into the United States for this year’s Between the Pages tour.

To learn more visit Cineplex.com or download the Cineplex App.

For Media Enquiries Only: