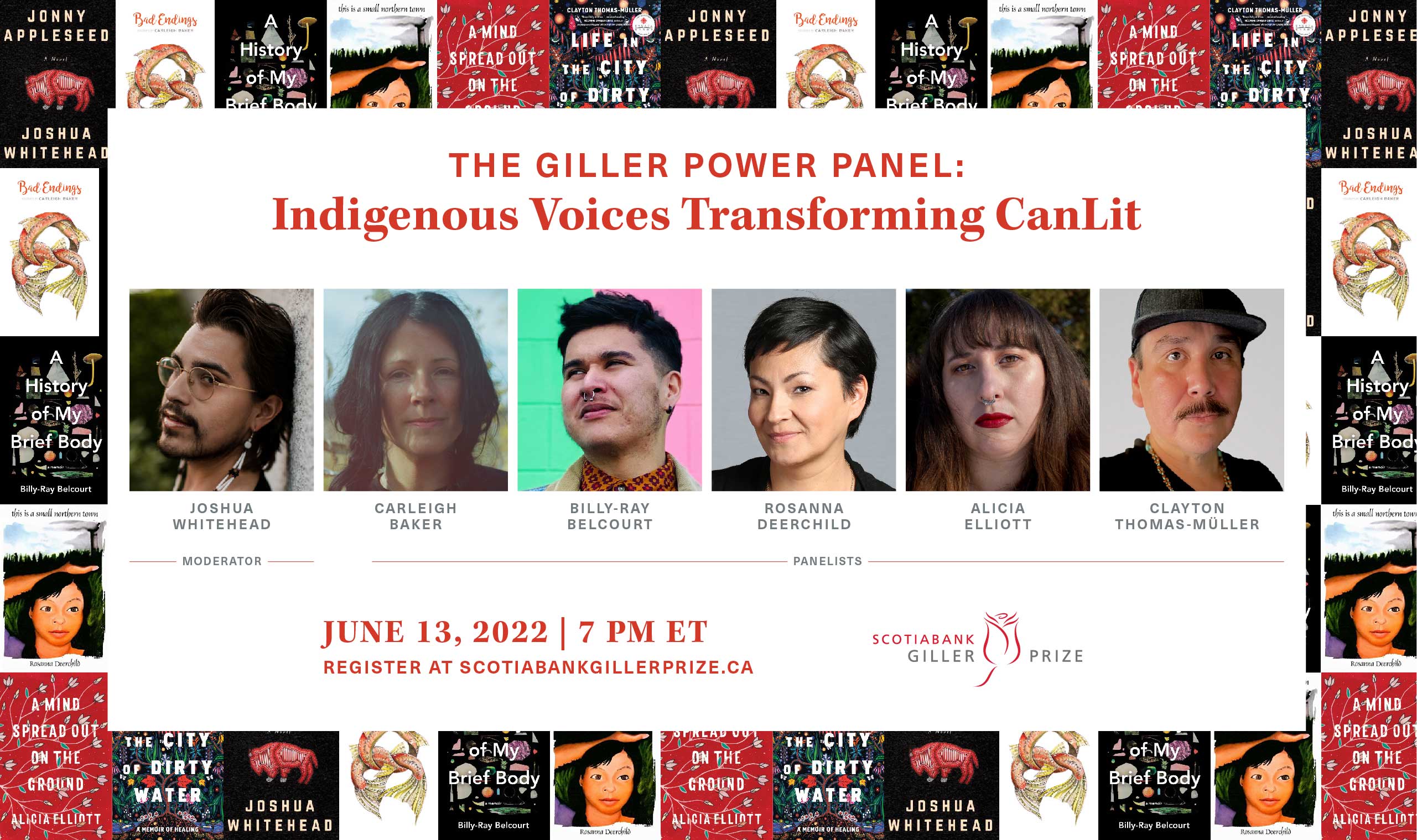 May 11, 2022 (Toronto, Ontario) – Elana Rabinovitch, Executive Director of The Giller Foundation, is pleased to announce the next Giller Power Panel. The June event will celebrate National Indigenous History Month and is entitled Indigenous Voices Transforming CanLit.

The panel will take place over Zoom on Monday, June 13, at 7 p.m. ET. Details and registration can be found at scotiabankgillerprize.ca/giller-power-panels.

Carleigh Baker
Carleigh Baker is an author and teacher of nêhiyaw âpihtawikosisân and European descent. Born and raised on Stó:lō territory, she currently lives on the unceded territories of the xʷməθkʷəy̓əm (Musqueam), Skwxwú7mesh (Squamish), and səl̓ilwəta (Tsleil-Waututh) peoples.

Her debut story collection, Bad Endings won the City of Vancouver Book Award, and was also a finalist for the Rogers Writers’ Trust Fiction Prize, the Bill Duthie Booksellers Choice Award, BC and Yukon Book Prizes, and the Emerging Indigenous Voices Award for fiction.

Her short stories and essays have been translated into several languages and anthologized in Canada, the United States, and Europe. She was the Western Canadian editor at Joyland Magazine from 2015 to 2018. Her newest collection, Last Woman, is forthcoming with McClelland & Stewart.

As a teacher and researcher, she is particularly interested in how contemporary fiction can be used to address the climate crisis. Her novel-in-progress, Mudlarkers, also forthcoming with McClelland & Stewart, is a darkly satirical look at how modern conservationist movements have displaced Indigenous voices on issues of land stewardship. She was a 2019/20 Shadbolt Fellow in the Humanities at Simon Fraser University, where she also teaches creative writing. She was also selected by the Writer’s Trust of Canada for a Berton House Residency in Dawson City during the winter months of early 2019.

Billy-Ray Belcourt
Billy-Ray Belcourt is from the Driftpile Cree Nation in northwest Alberta in Treaty 8 territory. He lives in Vancouver, where he is an Assistant Professor in the School of Creative Writing at the University of British Columbia. His books are This Wound is a World, winner of the 2018 Griffin Poetry Prize, NDN Coping Mechanisms, longlisted for Canada Reads, A History of My Brief Body, a finalist for the Governor General’s Literary Prize for Non-Fiction, and the forthcoming A Minor Chorus.

Rosanna Deerchild
Rosanna Deerchild has been storytelling for more than 20 years, currently as host of CBC Radio One’s UNRESERVED, a show that shares Indigenous community, culture and conversation.

Rosanna has also developed and hosted This Place, a podcast series for CBC Books around the Indigenous anthology This Place: 150 Years Retold.

Rosanna is a veteran broadcaster, having worked at APTN, CBC, Global and NCI-FM, where she hosted All My Relations. She has also hosted The (204) and the Weekend Morning Show on CBC Radio One and appeared on CBC Radio’s DNTO.

She is an award-winning author and poet. Her debut poetry collection ‘this is a small northern town‘ shares her reflections of growing up in a racially divided place. It won the 2009 Aqua Books Lansdowne Prize for Poetry. Her second book, ‘calling down the sky,’ is her mother’s Residential School survivor story.

Rosanna is a co-founder and member of the Indigenous Writers Collective of Manitoba and has also contributed to numerous Indigenous newspapers. A Cree from O-Pipon-Na-Piwan Cree Nation at South Indian Lake in northern Manitoba, Rosanna now lives and works in her found home of Winnipeg.

Alicia Elliot
Alicia Elliott is a Mohawk writer and editor living in Brantford, Ontario. She’s had numerous essays nominated for National Magazine Awards, winning Gold in 2017 and an honourable mention in 2020. Her short fiction was selected for Best American Short Stories 2018, Best Canadian Stories 2018, and Journey Prize Stories 30. Her award-winning first book, A Mind Spread Out On The Ground, was a national bestseller. Her first novel, And Then She Fell, will be released by Doubleday Canada in Fall 2023.

Clayton Thomas-Müller
Clayton Thomas-Müller is a member of the Treaty #6 based Mathias Colomb Cree Nation also known as Pukatawagan located in Northern Manitoba, Canada. Based in Winnipeg, Clayton is a senior campaign specialist with 350.org. Clayton is involved in many initiatives to support the building of an inclusive global movement for energy and climate justice. He serves on the board of the Bioneers and the Wildfire Project. He has been recognized by Yes Magazine as a Climate Hero and is featured as one of ten international human rights defenders in the National Canadian Museum for Human Rights. He has campaigned across Canada, Alaska and the lower 48 states organizing in hundreds of First Nations, Alaska Native and Native American communities to support Indigenous Peoples to defend their territories against the encroachment of the fossil fuel industry with a special focus on stopping the expansion of the Canadian tar sands and its associated pipelines. Clayton is a campaigner, award winning film director, media producer, organizer, facilitator, public speaker and best selling author on Indigenous rights and environmental & economic justice.

Joshua Whitehead
Joshua Whitehead is an Oji-nêhiyaw, Two-Spirit member of Peguis First Nation (Treaty 1). He is the author of Jonny Appleseed and full-metal indigiqueer alongside being the editor of Love after the End: an Anthology of Two-Spirit and Indigiqueer Fiction. Currently, he works as an Assistant Professor at the University of Calgary where he is housed in the departments of English and International Indigenous Studies.