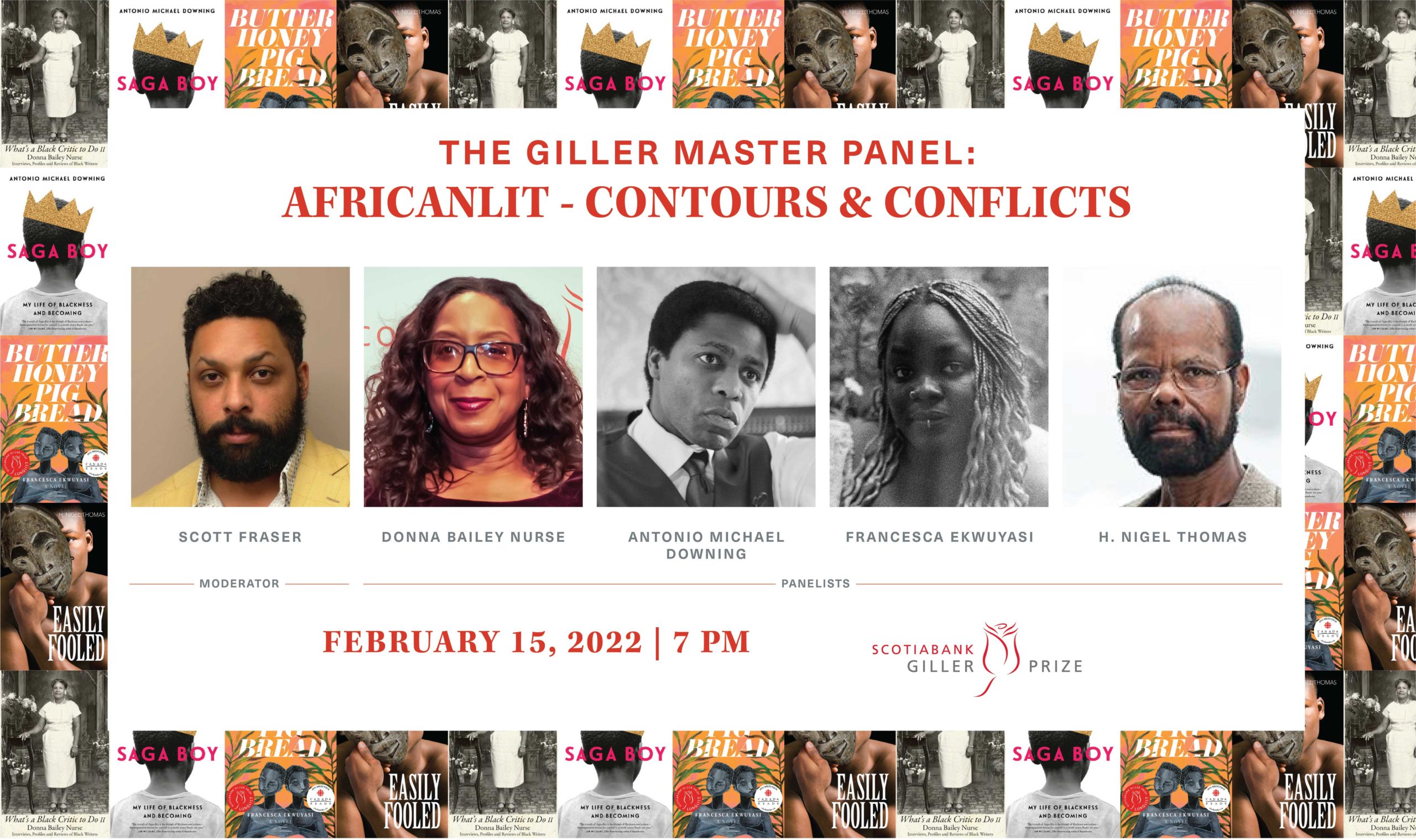 The panel will take place over Zoom on Tuesday, February 15, at 7 p.m. ET. Details and registration can be found at scotiabankgillerprize.ca/giller-power-panels.

The February 15 panel will focus on writers’ craft, the relationship between art, community and politics, and some of the interesting debates/discussions happening within contemporary Black life.

Scott Fraser, publisher and president of Dundurn Press, will moderate the panel.

Donna Bailey Nurse
Donna Bailey Nurse is a literary critic specializing in the work of Black Canadian writers and Black women writers around the world. She is the author of What’s A Black Critic to Do? and the editor of Revival: An Anthology of Black Canadian Writing. Her work has appeared in The Walrus, The Boston Globe, Maclean’s, The Globe and Mail and The Literary Review of Canada. Donna was a juror for the Scotiabank Giller Prize and has curated literary events for the Art Gallery of Ontario, the Toronto Public Library and currently for Luminato. She is at work on The Black Album, a people’s history of Canada for Harper Collins Canada, part of a two-book deal that includes a memoir of her Jamaican-Canadian family.

Antonio Michael Downing
Born and raised in South-Central Trinidad, Antonio Michael Downing aka John Orpheus is a Trinidadian-Canadian musical artist, author and speaker. His memoir Saga Boy was published in 2021 by Penguin Random House and was shortlisted for both the Speaker’s Book Prize and the Toronto Book Award. It is a visceral, vulnerable memoir about Blackness, identity and his quest for home. His upcoming children’s picture book Stars in my Crown will be published by Tundra Books in Fall 2022. The companion album to his memoir, the critically acclaimed, Saga King was voted by Exclaim Magazine as one of Canada’s 20 most anticipated albums of 2021. It combines hip-hop swagger, Afrobeat energy and dancehall charisma into a unique vision rooted in the African diaspora. He is a passionate advocate for the potency of art in healing ourselves and the world.

Scott Fraser
Scott Fraser is a Jamaican-Canadian publishing executive, consultant, and entrepreneur. He is the publisher and president of Dundurn Press Ltd, one of the largest Canadian-owned book publishing houses. Scott lives in Toronto.

H. Nigel Thomas
H. Nigel Thomas is a retired professor of U. S literature and the author of thirteen books: six novels, three collections of short fiction, two collections of poems, and two academic books. His novels Spirits in the Dark (1993) and Easily Fooled (2015) were shortlisted for the Hugh MacLennan Fiction Award. The French translation of Lives: Whole and Otherwise—Des vies cassées—was a finalist for the Carbet des lycéens award. He is the founder and English-language coordinator of Lectures Logos Readings and the editor of Kola. In 2000, he received the Montreal Association of Business Persons and Professionals’ Jackie Robinson Award for Professional of the year; in 2013, Université Laval’s Hommage aux créateurs; in 2019, the Montreal Black Theatre Workshop’s Martin Luther King Junior Achievement Award; and, in 2021, the Quebec Writers’ Federation Judy Mappin Community Award.