Skip to content
Giller Power Panel: A Demon in the House – Subverting the Gender Binary in Women’s Writing

Giller Power Panel: A Demon in the House – Subverting the Gender Binary in Women’s Writing 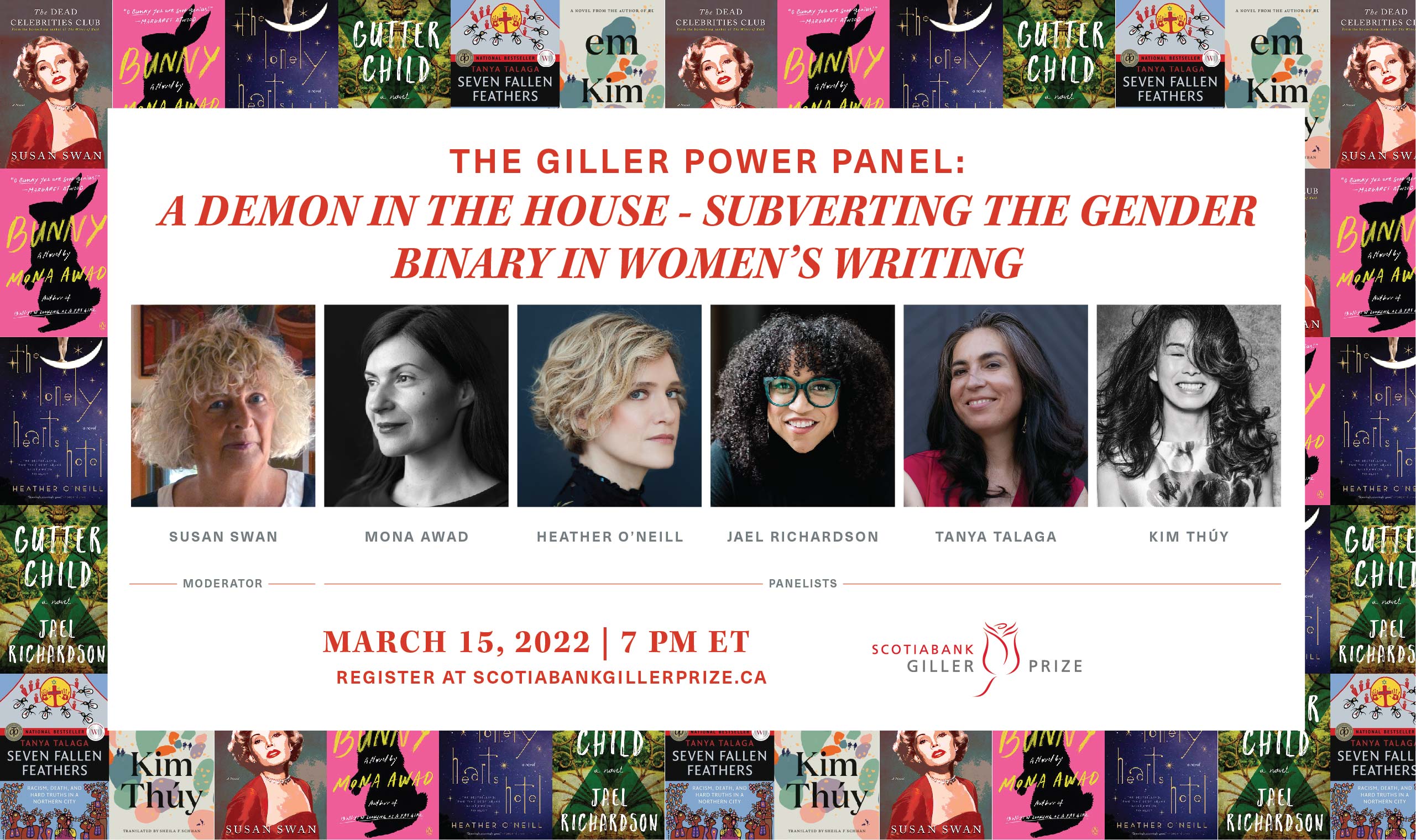 February 23, 2022 (Toronto, Ontario) – Elana Rabinovitch, Executive Director of The Giller Foundation, is pleased to announce the next Giller Power Panel. The March event will celebrate International Women’s Day (March 8) and is entitled A Demon in the House – Subverting the Gender Binary in Women’s Writing.

The panel will take place over Zoom on Tuesday, March 15, at 7 p.m. ET. Details and registration can be found at scotiabankgillerprize.ca/giller-power-panels.

The March Power Panel will focus on where women’s writing fits in a male-dominated authorial and publishing world, women’s work outside of their writing, and the media’s role in promoting – or not – women’s books.

Susan Swan, novelist and will moderate the panel.

Mona Awad
Mona Awad is the author of Bunny, named a Best Book of 2019 by Time, Vogue, CBC and the New York Public Library. It was a finalist for the New England Book Award and a Goodreads Choice Award for Best Horror. It is currently in development for film with Jenni Konner and New Regency Productions. Awad’s first novel, 13 Ways of Looking at a Fat Girl, was a finalist for the Scotiabank Giller Prize and a winner of the Amazon Best First Novel Award. Her latest novel, All’s Well, released last August, was a finalist for a Goodreads Choice Award and named a best or most anticipated book of the year by The Globe and Mail, The Toronto Star and CBC Books, among others. Her writing has appeared in The New York Times Magazine, Vogue, Time, McSweeney’s, Ploughshares, and elsewhere. She teaches in the creative writing program at Syracuse University.

Heather O’Neill
Heather O’Neill is a Montreal-based writer whose books include Lullabies for Little Criminals and The Lonely Hearts Hotel. She has won the Canada Reads competition, the Paragraphe Hugh MacLennan Prize for fiction and the Danuta Gleed Award. She has been shortlisted for the Women’s Prize for Fiction and for the Scotiabank Giller Prize twice. Her newest book (Feb. 2022) is When We Lost Our Heads.

Jael Richardson
Jael Richardson is the author of The Stone Thrower, a book columnist on CBC’s q and the founder and Executive Director for the Festival of Literary Diversity (FOLD) in Brampton, Ontario. Her debut novel, Gutter Child was shortlisted for the Amazon First Novel Award and is a finalist for the Forest of Reading White Pine Award. She holds an MFA in Creative Writing from the University of Guelph and lives in Brampton, Ontario.

Susan Swan
A novelist and an activist with international publications, Susan Swan’s acclaimed feminist fiction has been published in eighteen countries and translated into eight languages.

Her work in progress, Too Big: Fate, Feminism and Life with a Large Body, discusses the way her unusual height shaped her life and describes the three quests that Swan undertook in order to find a home that fit.

Swan’s memoir also tells the story of the giantess Anna Swan who exhibited with P.T. Barnum, and whose struggles with her size overshadowed Swan’s childhood. In order to exorcise that bogeywoman, Swan wrote her award winning first novel, The Biggest Modern Woman of the World about Anna’s life.

Margaret Atwood and screenwriter and actor Susan Coyne are developing a pilot television series based on the chapters in Too Big that deal with the Seventies conceptual art scene and Swan’s early feminism.

In 2019, Swan published her eighth book of fiction, The Dead Celebrities Club, described in the Globe and Mail as “a tale of greed, hubris and fraud…a financial fable worthy of the age.” Swan’s 2012 novel, The Western Light, was a prequel to The Wives of Bath, her international bestseller made into the feature film Lost and Delirious, which premiered at Sundance and was shown in 32 countries. Her 2004 novel What Casanova Told Me was a finalist for the Commonwealth Writers’ Prize.

In 2019, Swan won first prize for the Gloria Vanderbilt story contest for her story, The Oil Man’s Tale.

Swan was York’ University’s Robarts Scholar for Canadian Studies in 1999-2000. As chair of The Writers’ Union of Canada in 2008, she brought in a new benefits deal for writers.

Swan is the co-founder of The Carol Shields Prize for Fiction, an annual award that debuts in 2023 and is open to Canadian and American women fiction writers.

Tanya Talaga
Tanya Talaga is an Anishinaabe journalist and speaker. Talaga’s mother’s family is from Fort William First Nation and her father was Polish-Canadian.

For more than 20 years, she was a journalist at the Toronto Star covering everything from health to education, investigations and Queen’s Park. She’s been nominated five times for the Michener Award in public service journalism and been part of teams that won two National Newspaper Awards for Project of the Year.

Her first book, Seven Fallen Feathers, is a national bestseller, winning the RBC Taylor Prize, the Shaughnessy Cohen Prize for Political Writing, and the First Nation Communities Read Award: Young Adult/Adult. The book was also a finalist for the Hilary Weston Writers’ Trust Nonfiction Prize and the BC National Award for Nonfiction.

Her second book, All Our Relations: Finding The Path Forward, is also a national bestseller, finalist for the Hilary Weston Writers’ Trust Nonfiction Prize and a finalist for the British Academy’s Nayef Al-Rodhan Prize for Global Cultural Understanding.

Talaga was the 2017–2018 Atkinson Fellow in Public Policy and the 2018 CBC Massey Lecturer, the first Anishinaabe woman to be so.

Kim Thúy
Born in Saigon in 1968, Kim Thúy left Vietnam with the boat people at the age of ten and settled with her family in Quebec. A graduate in translation and law, she has worked as a seamstress, interpreter, lawyer, restaurant owner, media personality and television host. She lives in Montreal and devotes herself to writing.