Skip to content
The Giller Power Panel: The Perils of Publishing While Female

The Giller Power Panel: The Perils of Publishing While Female 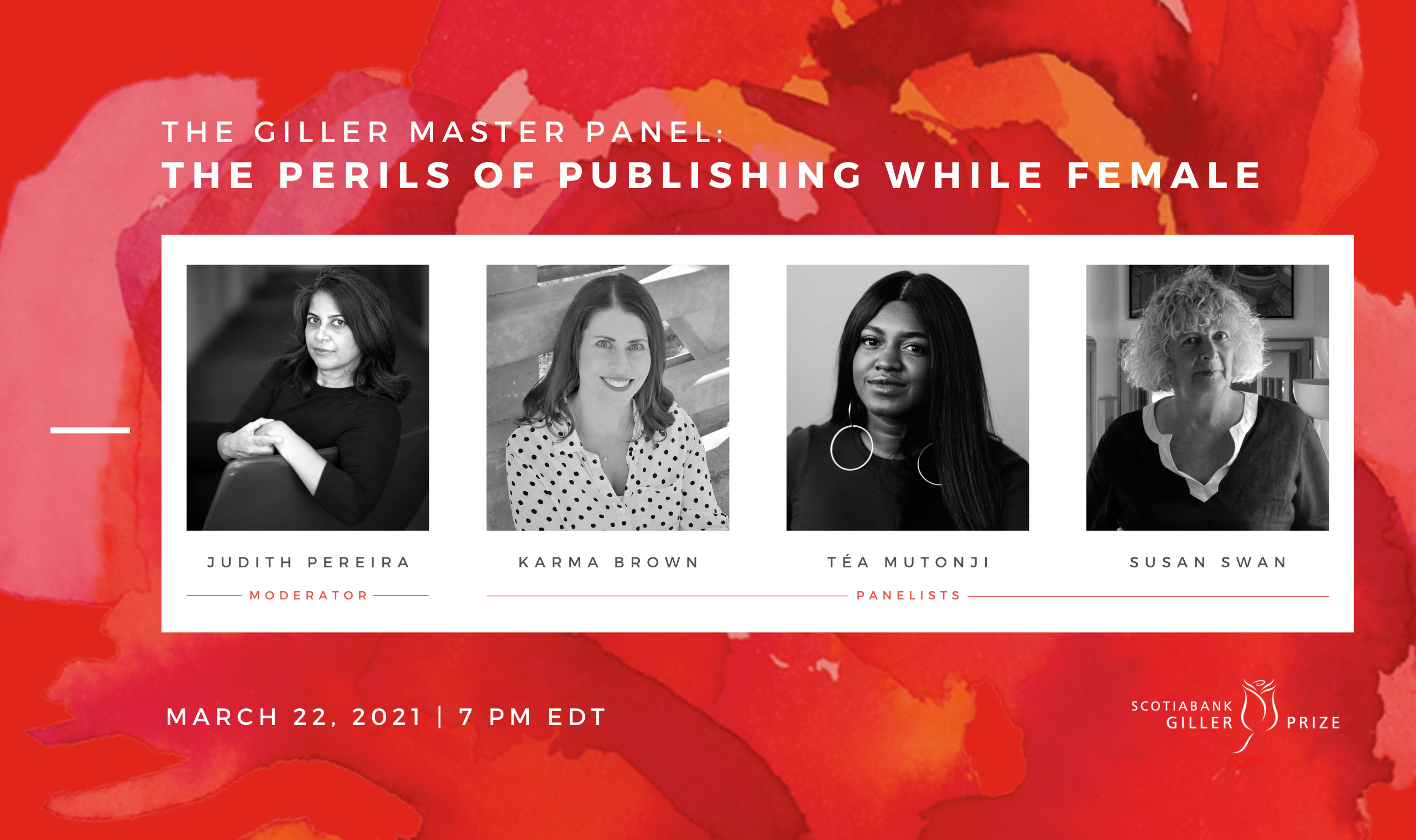 March 8, 2021 (Toronto, ON) – We are thrilled to announce that the second Scotiabank Giller Prize Power Panel will take place on Monday, March 22, at 7 p.m. EDT and will celebrate International Women’s Day.

The theme for this month will explore the challenges facing women writers in Canada, across age, race, and background.

Karma Brown is the bestselling author of five novels: the #1 national bestseller Recipe for a Perfect Wife, Come Away with Me (a Globe and Mail Best Book of 2015), The Globe and Mail and Toronto Star bestsellers The Choices We Make, In This Moment, and The Life Lucy Knew. She is also the author of The 4% Fix: How one hour can change your life. A National Magazine Award–winning journalist, Karma has been published in Chatelaine, Canadian Living, SELF, Redbook, and Today’s Parent, among others. She lives just outside Toronto with her husband, daughter, and a labradoodle named Fred.

Born in Congo-Kinshasa, Téa Mutonji’s work focuses primarily on friendship, womanhood, race and sexuality. Her essay, “The Price of Being Pretty,” which summarizes her journey into womanhood, was nominated for a digital publishing award in the category of best essays. She holds a degree in Media Studies and minors in English Literature and Creative Writing from the University of Toronto Scarborough, where she specialized in poetry and nonfiction. Her debut collection of short stories, Shut Up You’re Pretty is the first title from Vivek Shraya imprint, VS. Books. It was featured on several end-of-the-year lists, including The Globe 100: Books that shaped (2019), The Walrus Best Books (2019) and the Quill & Quire Books of The Year (2019) to name a few. Shut up You’re Pretty was shortlisted for the Atwood Gibson Writers’ Trust Fiction Prize (2019) and won the Edmund White Debut Fiction Award (2020) and the Trillium Book Award (2020). Téa is the nonfiction editor of Feel Ways: An anthology of Scarborough Writing, forthcoming from Mawenzi House this spring. She is the recipient of the Jill Davis fellowship in Fiction at New York University, where she’ll be an MFA candidate this fall. Until then, Téa lives and writes in Toronto.

Judith Pereira joined The Globe and Mail in 2001, as an intern at Report on Business magazine, while doing her Master’s degree in Publishing at Simon Fraser University. After a stint as features editor for globeandmail.com, she spent nearly two decades as an editor at the magazine, managing production, assigning the front-of-book section, creating packages and writing the occasional story, winning a gold medal and three silvers at the National Magazine Awards for packages and infographics. She became The Globe’s Books editor in 2019, bringing with her a lifelong love of books and publishing. Before joining The Globe, she worked for the now defunct Lichtman’s (where she learned the importance of recommendations to book sales) and read the slush pile at Penguin Canada (where she discovered nobody). She also worked in Iqaluit for the Office of the Interim Commissioner of Nunavut. She sits on the board of the Canadian Museum of Nature.

Susan Swan is a novelist, teacher, activist and journalist. Her critically acclaimed fiction has been published in twenty countries. In 2019, Swan won the Gloria Vanderbilt Short Story Award for The Oil Man’s Tale, and published her eighth book of fiction, The Dead Celebrities Club. Swan’s novel, the international bestseller, The Wives of Bath, was made into the feature film Lost and Delirious and shown in 32 countries in 2001. Her 2004 novel What Casanova Told Me was a finalist for the Commonwealth Writers’ Prize. Her first novel, The Biggest Modern Woman of the World, about a Canadian giantess who exhibited with P.T. Barnum is currently being made into a television series. Swan was York University’s Robarts Scholar for Canadian Studies in 1999-2000. A past chair of The Writers’ Union of Canada, she brought in a new benefits deal for writers. She is a co-founder of The Carol Shields Prize for Fiction with editor Janice Zawerbny.

Scotiabank is a leading bank in the Americas. Guided by our purpose: “for every future”, we help our customers, their families and their communities achieve success through a broad range of advice, products and services, including personal and commercial banking, wealth management and private banking, corporate and investment banking, and capital markets. With a team of over 90,000 employees and assets of approximately $1.1 trillion (as at October 31, 2020), Scotiabank trades on the Toronto Stock Exchange (TSX: BNS) and New York Stock Exchange (NYSE: BNS). For more information, please visit http://www.scotiabank.com and follow us on Twitter @ScotiabankViews.