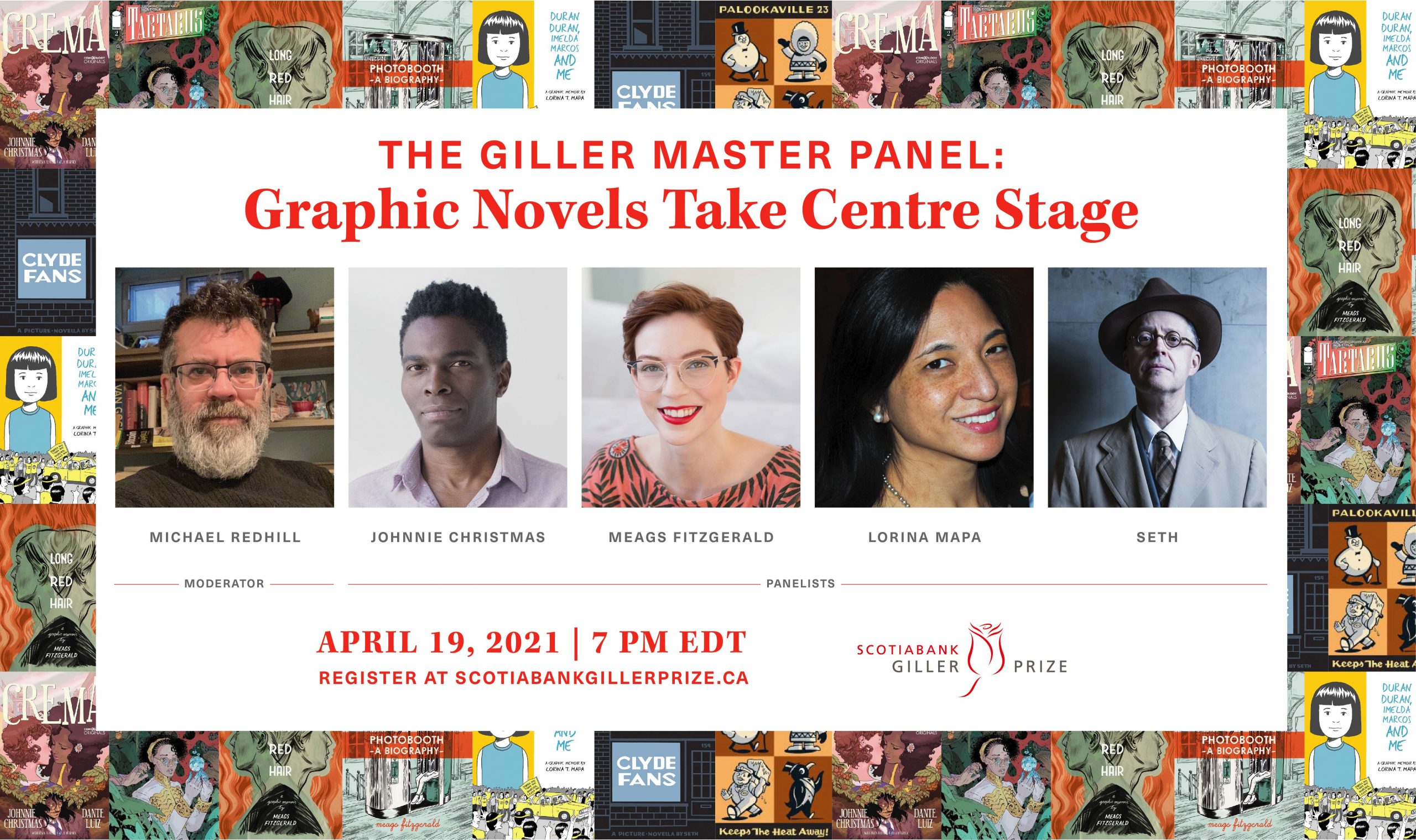 March 14, 2021 (Toronto, ON) – Elana Rabinovitch, Executive Director of the Scotiabank Giller Prize, is thrilled to announce that the third Giller Prize Power Panel will take place on Monday, April 19, at 7 p.m. EDT and will celebrate the art of graphic novels.

The panel will explore the art and culture of graphic novels as well as dive into what has made them so popular in the last decade.

Johnnie Christmas is a #1 New York Times best-selling graphic novelist. Writer of the Image Comics sci-fi series Tartarus and Crema, a haunted romance published by Comixology, he’s currently hard at work on three new middle-grade graphic novels for the HarperAlley, an imprint of HarperCollins. His book, Firebug, received a starred review from Publisher’s Weekly and earned him a Joe Shuster Outstanding Cartoonist nomination. He’s perhaps best known for co-creating the series Angel Catbird with celebrated writer Margaret Atwood and adapting William Gibson’s lost screenplay for Alien 3 into a critically acclaimed graphic novel of the same name. His credits also include co-creating the pre-apocalyptic thriller Sheltered. A graduate of the Pratt Institute in Brooklyn, NY, earning a BFA in Communication Design/Illustration, Johnnie now makes Vancouver, BC his home.

Meags Fitzgerald is a Montreal-based graphic novelist, illustrator and performer whose work is informed by history and gender studies. She’s the author of the queer coming of age memoir Long Red Hair and of the history and travelogue, Photobooth: A Biography, for which she won the 2015 Doug Wright Spotlight Award and was nominated for the 2015 Joe Shuster Best Cartoonist Award. She also illustrated the educational graphic novel Suffrage: Canadian Women and the Vote. Her short comics have appeared in French and English in numerous publications including Taddle Creek, The New Quarterly, Canadian Notes and Queries, Bitch Magazine, The National Post, Revue Planches and more.

Lorina Mapa was born in the Philippines and moved to North America at the age of 16. She studied at the Joe Kubert School of Cartoon and Graphic Art in New Jersey where she met her husband, cartoonist Daniel Shelton. They currently live in Montreal with their four children. Duran Duran, Imelda Marcos, and Me has been nominated by the American Library Association as a Great Graphic Novel for Teens, and Lorina was featured on the CBC’s 2017 list of Writers to Watch and nominated for the Joe Schuster award for best writer.

Michael Redhill is a novelist, poet, playwright and former publisher of Brick Magazine. He is the author of Bellevue Square – which won the 2017 Scotiabank Giller Prize – Consolation and Martin Sloane, which was a finalist for the 2001 Giller Prize; the short story collection Fidelity; and the poetry collection Light-Crossing, among other acclaimed works. He lives in Toronto, Ontario.

Seth is the cartoonist behind the comic book series Palookaville, which started in the stone age as a pamphlet and is now a semi-annual hardcover. His comics have appeared in The New York Times Magazine, Best American Comics, and McSweeneys Quarterly. His illustrations have appeared in numerous publications including the cover of The New Yorker, The Walrus, and Canadian Notes & Queries. He is also Lemony Snicket’s partner for the new young readers series, All the Wrong Questions, and has illustrated and designed a new, deluxe edition of Stephen Leacock’s Sunshine Sketches of a Little Town. He is the designer for several classic comics reprint series, notably collections of work by Charles Schulz, John Stanley, and Doug Wright. His graphic novel Clyde Fans was longlisted for the 2020 Scotiabank Giller Prize.