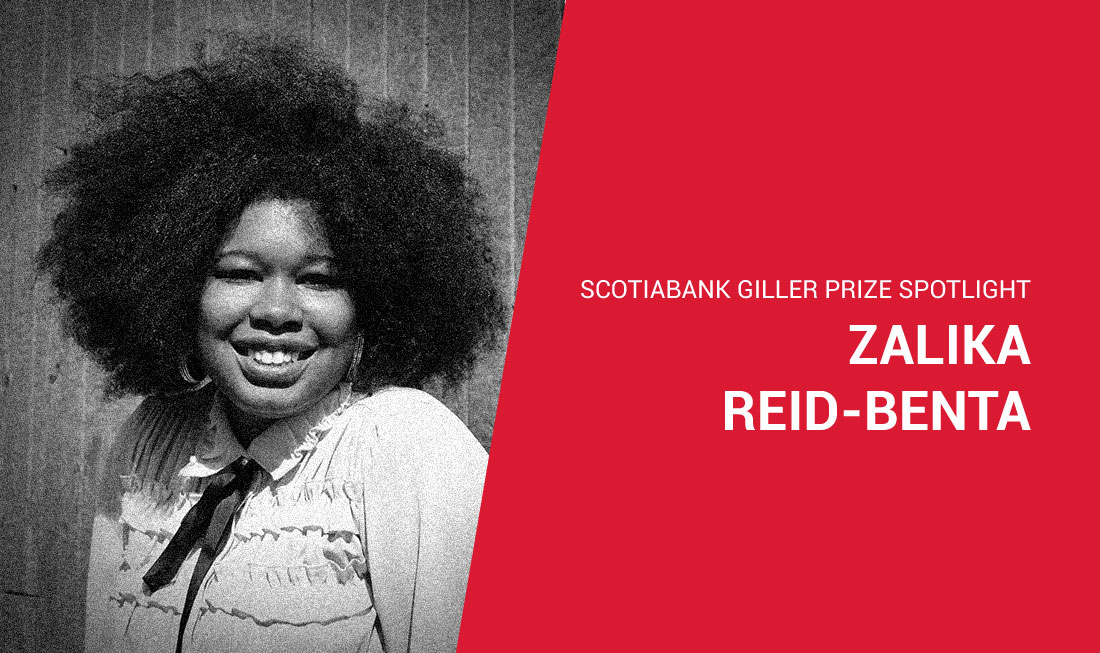 Zalika Reid-Benta is a Toronto-based writer whose work has appeared on CBC Books, in TOK: Writing the New Toronto, and in Apogee Journal. In 2011, George Elliott Clarke recommended her as a “Writer to Watch.” She received an M.F.A. in fiction from Columbia University in 2014 and is an alumnus of the 2017 Banff Writing Studio. She completed a double major in English Literature and Cinema and a minor in Caribbean Studies at University of Toronto’s Victoria College. She also studied Creative Writing at U of T’s School of Continuing Studies. She is currently working on a young-adult fantasy novel drawing inspiration from Jamaican folklore and Akan spirituality.

This is Zalika’s first time being longlisted for the Scotiabank Giller Prize.

In terms of literary heroes, Toni Morrison is definitely my biggest one and reading her work, reading what she does with language, definitely motivates me to write the best way I can. However, I will say just being around passionate writers inspires me to do my best. Recently, I had the opportunity to spend ten days around some brilliant poets and writers and hearing them read, getting to know their work, listening to them teach a class or give a lecture, it made me want to be the best writer I could be.

“Yes, but my lonely is mine. Now your lonely is somebody else’s. Made by somebody
else and handed to you. Ain’t that something? A secondhand lonely.”

I watch movies or I watch TV but my choices are specific. Right now I’m working on a YA fantasy and if I want to get myself in the mood, I’ll put on Lord of the Rings or Avatar: The Last Airbender or this Korean drama called Goblin because it deals with mythology — movies and shows that are either atmospheric or well-written get me thinking about what I want to do with my own work.

I’ve only finished one! I don’t know if I have a tradition yet.

A few things. Everyone Knows I Am A Haunting by Shivanee Ramlochan, A Cruelty Special to Our Species by Emily Jungmin Yoon and Well-Read Black Girl by Glory Edim.

The Marrow Thieves by Cherie Dimaline.

I get this question a lot and I think my answer changes every time since each story in the collection comes with a different inspiration and at the time I wrote it, I didn’t really think about it, the collection felt like it just sprang out of me. As I hinted at before, I watch a lot of movies and a lot of TV and that has always been the case. I grew up watching movies like Now and Then and My Girl or reading books by Judy Blume and I certainly enjoyed them but didn’t see myself represented in those stories.

When I saw movies like Crookyln or read books like Annie John, they had a huge impact on me, they spoke to me but they were still not experiences I could entirely relate to. So, for stories like Snow Day and Before/After I wanted to write about growing up in the diaspora, growing up Black and Caribbean in Toronto and what that looks like for some girls, what the slang is like, what the conversations are like, something very specific yet with universal themes. For stories like Brendan & Sheila and Faith Community, that’s a little harder to trace.

Normally, the first thing that comes to me when writing is a dialogue exchange and once I write that down, the story builds from there and I’m never quite sure what the story will be until halfway through and that was the process for those two. I will say that the older I got, the more I put Toronto in the story, the more specific I got with location and street names and it became about commemorating a city I grew up with