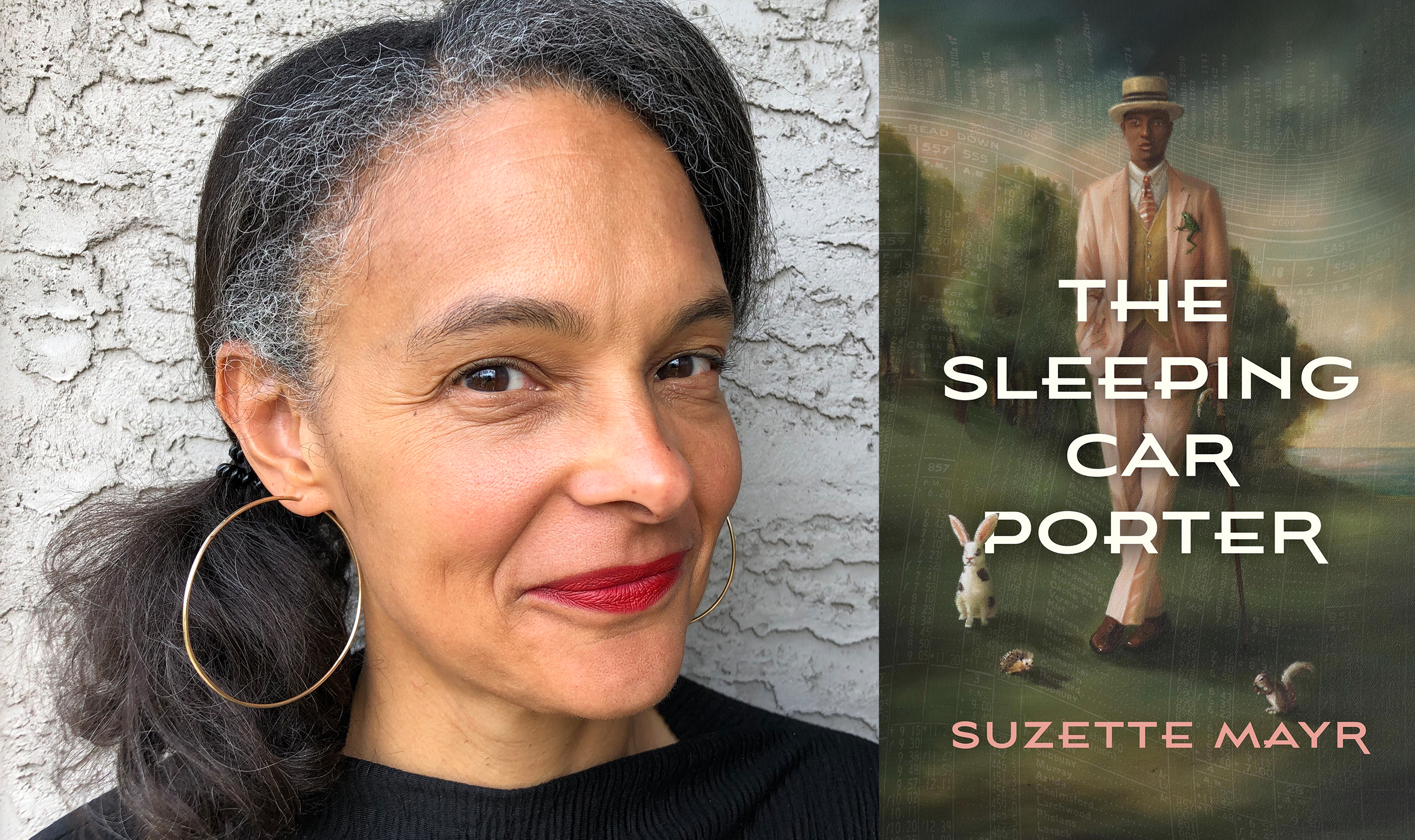 Suzette Mayr’s novel The Sleeping Car Porter has been longlisted for the 2022 Scotiabank Giller Prize.

Suzette Mayr is the author of the novels Dr. Edith Vane and the Hares of Crawley Hall, Monoceros, Moon Honey, The Widows, and Venous Hum. The Widows was shortlisted for the Commonwealth Writers’ Prize for Best Book in the Canada-Caribbean region, and has been translated into German. Moon Honey was shortlisted for the Writers’ Guild of Alberta’s Best First Book and Best Novel Awards. Monoceros won the ReLit Award, the City of Calgary W. O. Mitchell Book Prize, was longlisted for the 2011 Giller Prize, and shortlisted for a Ferro-Grumley Award for LGBT Fiction, and the Georges Bugnet Award for Fiction. She and her partner live in a house in Calgary close to a park teeming with coyotes.

I’ve always had a dog for most of my adult life, and so I do a lot of walking and picking up of poo on a daily basis. I used to really like listening to podcasts or music, or talking on the phone while I was walking the dog, but then I read an interview with Joyce Carol Oates where she said that she always takes a daily run and her ideas come to her while she’s running. I gave up running a long time ago, but I knew that what she was saying was true because the times when I forgot my phone or my battery was dead I’d walk and every so often get idea-sparks or resolve writing problems – but like I say, there’s also a lot of picking up poo and sometimes dog fights you have to break up when you walk a dog and so it’s nicer to do those things when you’ve got a nice, kicky soundtrack or some comedian cracking jokes in the background. Anyway, I now walk without being plugged into my phone (except for Friday afternoons as a treat to myself), and it’s true that the ideas do come when I’m out walking, and I can dictate the ideas into my phone. I’m sure there’s some scientific explanation about the connection between exercise and creativity but I don’t know it. All I know is there’s nothing like being forced outside in -30 degrees celsius by a chippy dog to get the creative brain cells snapping awake.

Ha! I wish. My writing-group friends and I have a running joke about how writers in the movies always type “The End” when they’re done writing a manuscript. I’ve tried to do that. I did that with the manuscript for The Sleeping Car Porter. I typed “The End,” and I had a good cry, saying goodbye to the characters and the beautiful world I’d created, boo hoo hoo, and then I sent it off to Alana Wilcox at Coach House Books. Well, she sent the manuscript right back with a whole bunch of edits, saying I needed to do another draft. I was like, “What? I thought I was done.” No dice. I wanted to cry, but for a whole other reason. Typing “The End” when you’ve finished writing a manuscript is a big lie and a scam.

Lots of things! I’m reading through the comic book series The Eye Collector by Jonathan Ball and GMB Chomichuk; Dark Tales by Shirley Jackson; Kindred by Octavia Butler; The House of Dies Drear by Virginia Hamilton; Volume 1 of the Diaries of Henry “Chips” Channon edited by Simon Heffer; The Dangers of Smoking in Bed by Mariana Enriquez; David Demchuk’s The Bone Mother; Uncertain Kin by Janice Lynn Mather; Sodom Road Exit by Amber Dawn; and Face the Music: A Life Exposed by Paul Stanley.

There are so many. I would say my current favourite book is The Red Chesterfield by Wayne Arthurson. I adore that book. It’s like a very sweet, deconstructed murder mystery told in single page chapters. It’s astonishing. I also really loved Emily Austin’s Everyone In this Room Will Someday Be Dead. It’s like The Bell Jar but queer and funny – I don’t know how else to describe it. What a great book.

My wife and I got Covid this summer, and I kind of retreated into a mental space of wanting only the familiar because my brain was so fried I couldn’t handle anything else. I pulled off the shelf a book I made a point of reading annually when I was a kid: The Ghost Belonged to Me by Richard Peck. It’s technically YA, but really it’s for everyone. It’s creepy, it’s romantic, and years later I learned that Richard Peck was a gay man and it made sense because he has an outsider’s eye, and I think that perspective resonated with me as an embryonic queer person when I was a tween. I also loved reading The Long Secret, the sequel to Harriet the Spy. What a complicated book.

It was a search for ancestral, queer family. There are so few traces of queer black folk historically, and because I couldn’t even begin to locate any examples of queer black folk in my own family tree, I had to make the main character up from the traces I could find of queer black people in Canada – mostly in court records and police reports – and extrapolate from there. I dedicate the novel in part to a man named Davis – a porter the historian Steven Maynard told me about, who was a married man in his 40s who was arrested for gross indecency in the early part of the 20th century, in Toronto I think. My heart breaks for him and men like him, and I wanted to give that story a happy ending.

Be nice to people who work in the service industry! There’s no reason you can’t be nice or at least polite, for crying out loud. Also, black Canadian history is everywhere – it might not be in the official archives, but it’s there, and it’s worth its weight in emeralds.