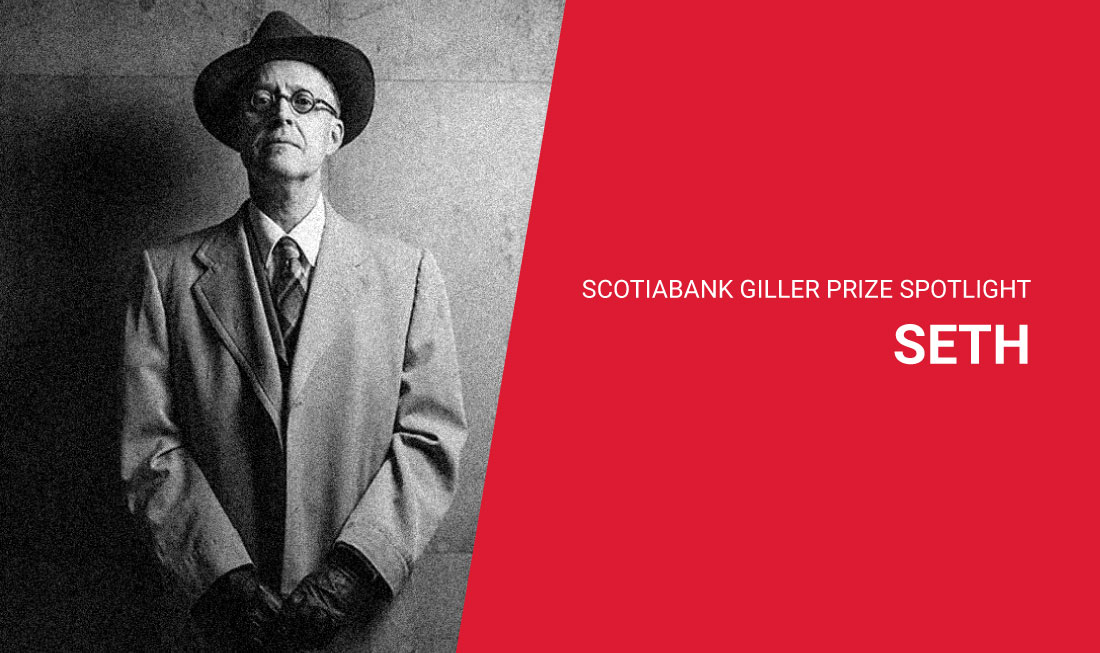 Seth’s graphic novel, Clyde Fans has been longlisted for the 2020 Scotiabank Giller Prize.

Seth is the cartoonist behind the comic book series Palookaville, which started in the stone age as a pamphlet and is now a semi-annual hardcover. His comics have appeared in the New York Times Magazine, Best American Comics, and McSweeneys Quarterly. His illustrations have appeared in numerous publications including the cover of the New Yorker, the Walrus, and Canadian Notes & Queries. He is also Lemony Snicket’s partner for the new Young Readers series, All the Wrong Questions, and has illustrated and designed a new, deluxe edition of Stephen Leacock’s Sunshine Sketches of a little Town. He is the designer for several classic comics reprint series, notably collections of work by Charles Schulz, John Stanley, and Doug Wright.

I am very fond of this quote from Max Beerbohm, “Only mediocrity can be trusted to always be at its best.”

Considering that it took me twenty years to finish Clyde Fans (and I am now 58 years old) I don’t think I will have quite enough time to develop any “book-finishing” traditions unless I start working a lot faster.

I am a few books into rereading all of Anita Brookner’s novels. I was intrigued by her obituary a few years ago in the Times and gave her Booker-winning novel, Hotel du lac, a try. I liked it enough to try another. Eventually, her lonely, plodding, depressing novels won me over and I read every one of her 23 novels (and one short story) one after the other. Now I am reading them again. I think she’s now my favourite writer.

Hard not to pick one of Alice Munro’s books, but which one? They are all fabulous. I suppose I should pick another Cartoonist—something by Chester Brown or Michael Deforge. Perhaps my old Standard, The Stone Angel. It’s such a boring answer though. I mean, how many times has someone picked The Stone Angel as a favourite book? It’s probably the kind of answer you give when you’ve only read one Canadian book. Or you vaguely recall taking it in high school. Even so, I love the book and have read it every decade of my life (since high school). To hell with it. The Stone Angel. It’s a great book.

Well, considering that I started out more interested in drawing than writing, I guess I’d have ended up as some sort or artist or other. If not that then, God knows. I have no marketable skills whatsoever besides art skills. So, I guess dishwasher. I did have a good run as a dishwasher.

This is an easy one. My favourite book as a child (and perhaps still my favourite book) was a big fat volume from Whitman publishing called 365 Bedtime Stories. Whitman published several volumes under this title but this one was written by Nan Gilbert and Illustrated by Jill Elgin. It’s for very young children. A single-story a page. The wonderful conceit of the book, and what makes it so much better than all those other 365 type books, is that each of the stories is set on the same street and all the little stories interconnect. The book is from 1954 and could not be more square. Everyone (and I mean everyone!) is a total goody-goody and everything works out just fine in every story. It is, naturally, a very comforting read. However, as absurd as it may seem I suspect almost every narrative idea I’ve ever had could be traced back to the clever writing strategies Ms. Gilbert used to put this book together. Every time I see a copy, I buy it.

Virginia Woolf’s To The Lighthouse. There is not a finer novel for capturing the quality of mind/life and inner/outer. I marvel at it every time I read it. It never diminishes but only grows brighter at each rereading. It is just such a sad book too. And yet, it has a kind of exultation too.