Michael Redhill is the Winner of the 2017 Scotiabank Giller Prize 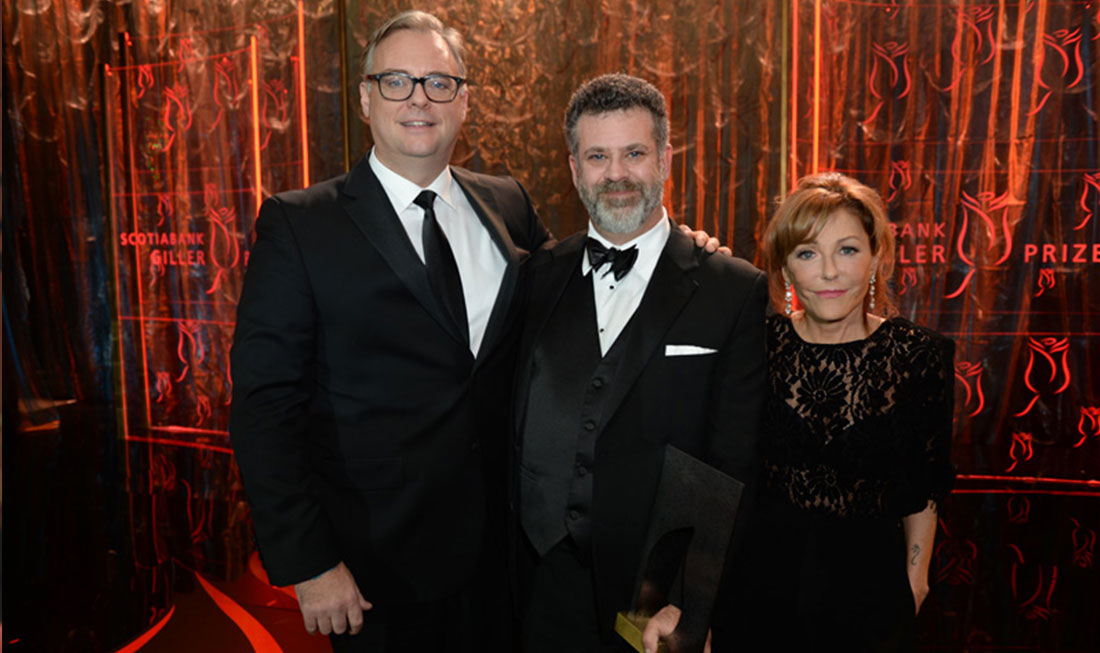 November 20, 2017 (Toronto, ON) – Michael Redhill has been named the winner of the $100,000 Scotiabank Giller Prize for his novel Bellevue Square, published by Doubleday Canada. The announcement was made at a black-tie dinner and award ceremony hosted by Mary Walsh and attended by nearly 500 members of the publishing, media and arts communities. The gala was broadcast live on CBC, CBC Radio One and live-streamed on CBCBooks.ca.

This year the Prize celebrates its 24th anniversary.

The shortlist of five authors and their books, announced on October 2, 2017, included:

To borrow a line from Michael Redhill’s beautiful Bellevue Square, “I do subtlety in other areas of my life.” So let’s look past the complex literary wonders of this book, the doppelgangers and bifurcated brains and alternate selves, the explorations of family, community, mental health, and literary life. Let’s stay straightforward, and tell you that beyond the mysterious elements, this novel is warm, and funny, and smart. Let’s celebrate that it is, simply, a pleasure to read.

Michael Redhill is a novelist, poet, playwright and former publisher of Brick. He is the author of the novels Consolation and Martin Sloane, which was a finalist for the 2001 Giller Prize; the short story collection Fidelity; and the poetry collection Light-Crossing; among other acclaimed works. He lives in Toronto.

Listen to CBC Radio’s q tomorrow at 10 a.m. ET for an interview with Michael Redhill and relive the gala at CBCBooks.ca.

Ask the author your questions about his book during a live Twitter chat hosted by @GillerPrize on November 23 at 2:00 p.m. ET using the hashtag #GillerWinner.

Images from tonight’s gala will be available on the media resources page.

Audible is the exclusive audiobook sponsor of the Scotiabank Giller Prize. In September, the world’s leader in
Audiobooks and audio entertainment launched Audible.ca, a dedicated service for Canadians which celebrates our country’s rich literary and theatrical tradition.

The winner of the Scotiabank Giller Prize will be given an opportunity to explore, expand, and develop their practice during a two-week, self-directed residency in Banff Centre for Arts and Creativity’s exclusive Leighton Artists’ Studios. Banff Centre is Canada’s leading destination for arts training and is located in the heart of Banff National Park. (banffcentre.ca)

The Scotiabank Giller Prize, founded in 1994, highlights the very best in Canadian fiction year after year. The Prize awards $100,000 annually to the author of the best Canadian novel or short story collection published in English, and $10,000 to each of the finalists. The award is named in honour of the late literary journalist Doris Giller by her husband Toronto businessman Jack Rabinovitch, who passed away suddenly in August 2017.

Scotiabank is Canada’s international bank and a leading financial services provider in North America, Latin America, the Caribbean and Central America, and Asia-Pacific. We are dedicated to helping our 24 million customers become better off through a broad range of advice, products and services, including personal and commercial banking, wealth management and private banking, corporate and investment banking, and capital markets. With a team of more than 88,000 employees and assets of over $906 billion (as at July 31, 2017), Scotiabank trades on the Toronto (TSX: BNS) and New York Exchanges (NYSE: BNS). For more information, please visit www.scotiabank.com and follow us on Twitter @ScotiabankViews.

CBC/Radio-Canada is Canada’s national public broadcaster and one of its largest cultural institutions. We are Canada’s trusted source of news, information and Canadian entertainment. Deeply rooted in communities all across the country, CBC/Radio-Canada offers diverse content in English, French and eight Indigenous languages. We also provide international news and information from a uniquely Canadian perspective. In 2017, CBC/Radio-Canada will be at the heart of the celebrations and conversations with special 2017-themed multiplatform programming and events across Canada.

Audible, Inc., an Amazon.com, Inc. subsidiary (NASDAQ:AMZN), is the leading provider of premium digital spoken audio content, offering customers a new way to enhance and enrich their lives every day. Audible was created to unleash the emotive music in language and the habituating power and utility of verbal expression. Audible content includes more than 300,000 audio programs from leading audiobook publishers, broadcasters, entertainers, magazine and newspaper publishers, and business information providers. Audible is also the provider of spoken-word audio products for Apple’s iTunes Store.

Founded in 1933, Banff Centre for Arts and Creativity is a learning organization built upon an extraordinary legacy of excellence in artistic and creative development. What started as a single course in drama has grown to become the global organization leading in arts, culture, and creativity across dozens of disciplines. From our home in the stunning Canadian Rocky Mountains, Banff Centre for Arts and Creativity aims to inspire everyone who attends our campus – artists, leaders, and thinkers – to unleash their creative potential and realize their unique contribution to society through cross-disciplinary learning opportunities, world-class performances, and public outreach. www.banffcentre.ca

Proudly recognized as having one of the country’s Most Admired Corporate Cultures, Cineplex employs approximately 13,000 people in its offices across Canada and the United States. To learn more visit Cineplex.com or download the Cineplex App.