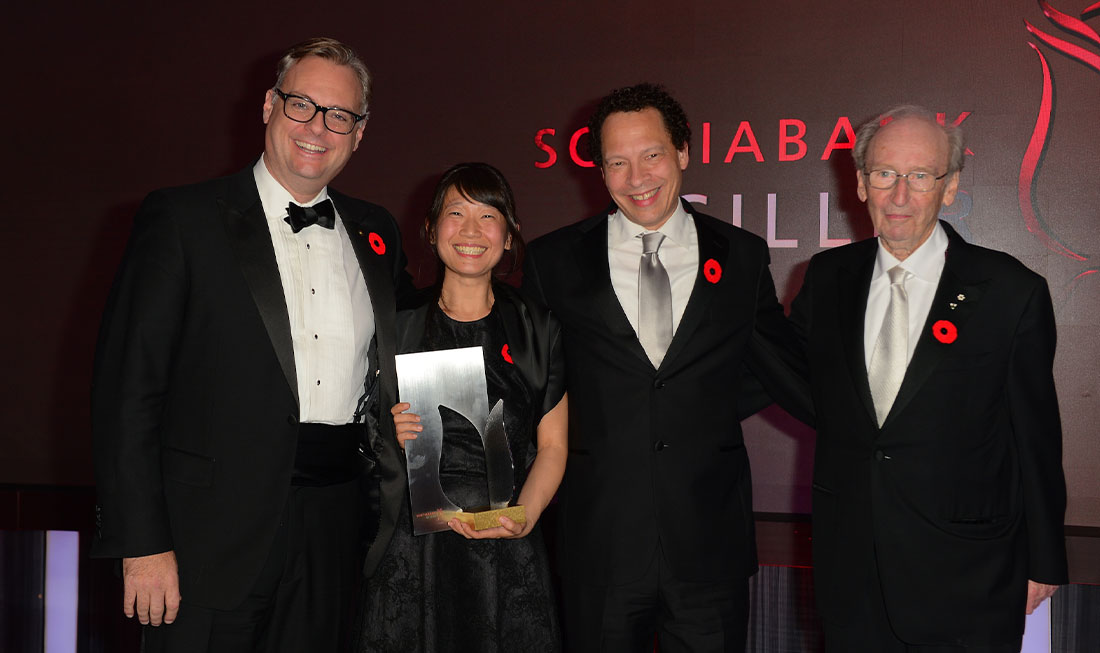 Madeleine Thien has been named the winner of the $100,000 Scotiabank Giller Prize for her novel, Do Not Say We Have Nothing, published by Alfred A. Knopf Canada. The announcement was made at a black-tie dinner and award ceremony hosted by Steve Patterson, attended by nearly 500 members of the publishing, media and arts communities. The gala awards were broadcast by CBC and live-streamed on CBCBooks.ca.

This year the prize celebrates its 23rd anniversary.

Here is a look at the 2016 shortlisted titles:

“Do Not Say We Have Nothing by Madeleine Thien entranced the jurors with its detailed, layered, complex drama of classical musicians and their loved ones trying to survive two monstrous insults to their humanity: Mao Zedong’s Cultural Revolution in mid-twentieth century China and the Tiananmen Square massacre of protestors in Beijing in 1989. Do Not Say We Have Nothing addresses some of the timeless questions of literature: who do we love, and how do the love of art, of others and ourselves sustain us individually and collectively in the face of genocide? A beautiful homage to music and to the human spirit, Do Not Say We Have Nothing is both sad and uplifting in its dramatization of human loss and resilience in China and in Canada.”

Madeleine Thien is the author of the story collection Simple Recipes, which was a finalist for the Commonwealth Writers’ Prize, a Kiriyama Pacific Prize Notable Book, and won the BC Book Prize for Fiction; the novel Certainty, which won the Amazon.ca First Novel Award; and the novel Dogs at the Perimeter, which was shortlisted for Berlin’s 2014 International Literature Award and won the Frankfurt Book Fair’s 2015 Liberaturpreis. Her novels and stories have been translated into twenty-five languages, and her essays have appeared in Granta, The Guardian, the Financial Times, Five Dials, Brick and Al Jazeera. Her story “The Wedding Cake” was shortlisted for the prestigious 2015 Sunday Times EFG Short Story Award. Do Not Say We Have Nothing won the 2016 Governor General’s Literary Award. The daughter of Malaysian-Chinese immigrants to Canada, she lives in Montreal.

Listen to CBC Radio’s q tomorrow at 10 a.m. ET for an interview with Madeleine Thien and relive the gala at CBCBooks.ca.

Ask the author your questions about her book during a live Twitter chat hosted by @GillerPrize on November 10 at 2:00 p.m. ET using the hashtag #GillerWinner.

In a new and exclusive partnership with World Literacy Canada (WLC), the winner of the 2016 Scotiabank Giller Prize will appear in the WLC 2017 Kama Reading Series. WLC has over 60 years of experience serving women and children in an effort to reduce poverty through literacy.

The winner of the Scotiabank Giller Prize will be given an opportunity to explore, expand, and develop their practice during a two-week, self-directed residency in Banff Centre for Arts and Creativity‘s exclusive Leighton Artists’ Colony. Banff Centre is Canada’s leading destination for arts training and is located in the heart of Banff National Park.

The Scotiabank Giller Prize strives to highlight the very best in Canadian fiction year after year. The prize awards $100,000 annually to the author of the best Canadian novel or short story collection published in English and $10,000 to each of the finalists. The award is named in honour of the late literary journalist Doris Giller and was founded in 1994 by her husband, Toronto businessman Jack Rabinovitch.

Through our global community investment strategy, Scotiabank and its employees support causes at a grassroots level. Recognized as a leader for our charitable donations and philanthropic activities, in 2015, Scotiabank contributed $67 million to help our communities around the world.

Scotiabank is Canada’s international bank and a leading financial services provider in North America, Latin America, the Caribbean and Central America, and Asia-Pacific. We are dedicated to helping our 23 million customers become better off through a broad range of advice, products and services, including personal and commercial banking, wealth management and private banking, corporate and investment banking, and capital markets. With a team of more than 88,000 employees and assets of $907 billion (as at July 31, 2016), Scotiabank trades on the Toronto (TSX: BNS) and New York Exchanges (NYSE: BNS). Scotiabank distributes the Bank’s media releases using Marketwired.

CBC/Radio-Canada is Canada’s national public broadcaster and one its largest cultural institutions. We are Canada’s trusted source of news, information and Canadian entertainment. Deeply rooted in communities all across the country, CBC/Radio-Canada offers diverse content in English, French and eight aboriginal languages. We also provide international news and information from a uniquely Canadian perspective.

Founded in 1933, Banff Centre for Arts and Creativity is a learning organization built upon an extraordinary legacy of excellence in artistic and creative development. What started as a single course in drama has grown to become the global organization leading in arts, culture, and creativity across dozens of disciplines. From our home in the stunning Canadian Rocky Mountains, Banff Centre for Arts and Creativity aims to inspire everyone who attends our campus – artists, leaders, and thinkers – to unleash their creative potential and realize their unique contribution to society through cross-disciplinary learning opportunities, world-class performances, and public outreach.

World Literacy Canada (WLC) is a registered charity with a successful 60-year record of educational development work in Canada and around the world. WLC employs a collaborative, community-led approach to program delivery with a focus on women and their children. The Kama Reading Series is WLC’s annual event series held in support of its literacy programs. The series runs from January to May with one evening of readings per month, featuring Canada’s most celebrated and most promising authors. 2017 marks the 25th anniversary year of the Kama Reading Series.