Skip to content
Giller Power Panel: Less is More – The Art of the Short Story

Giller Power Panel: Less is More – The Art of the Short Story 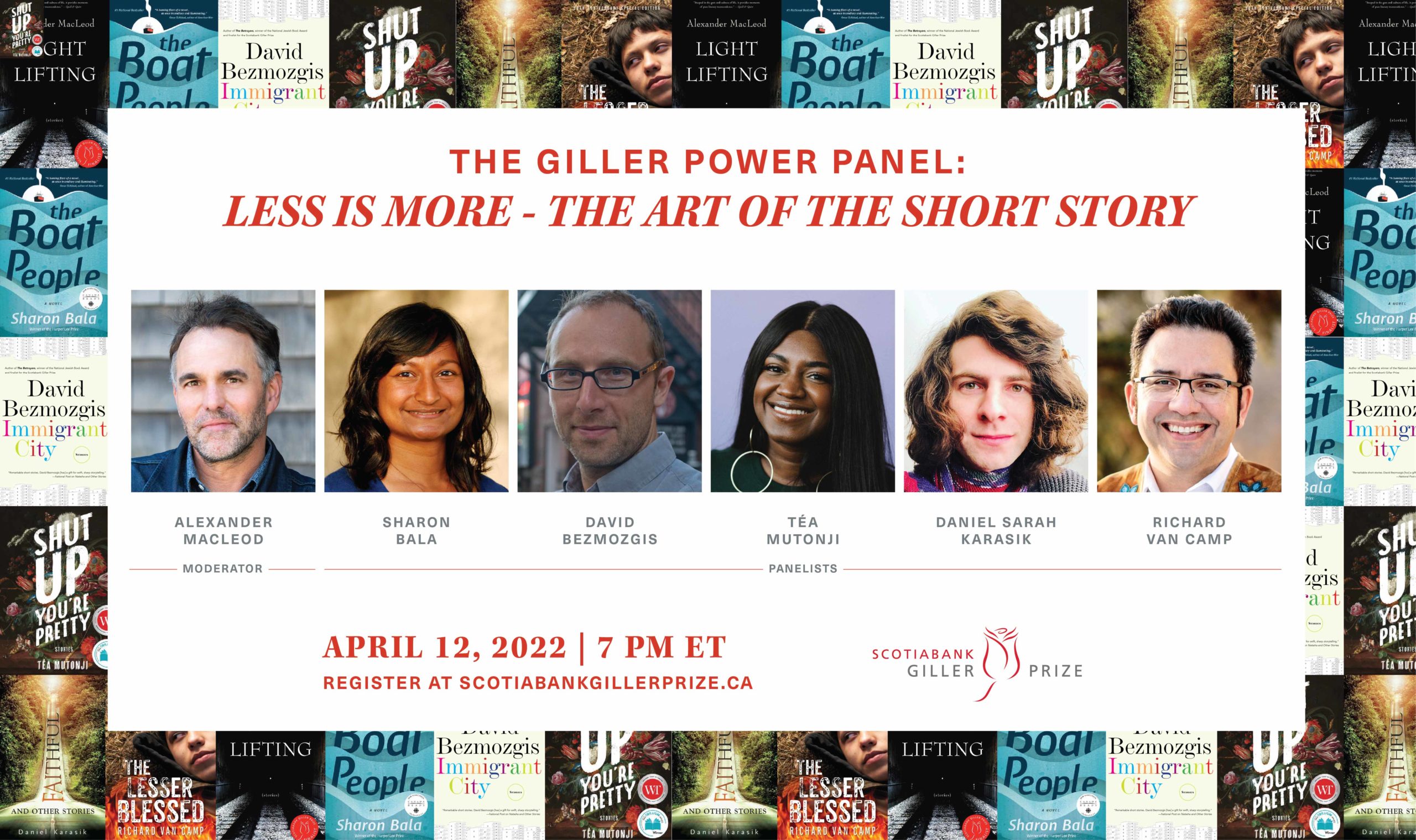 March 28, 2022 (Toronto, Ontario) – Elana Rabinovitch, Executive Director of The Giller Foundation, is pleased to announce the next Giller Power Panel. The April event will celebrate the art of short story writing and is entitled Less is More – The Art of the Short Story.
The panel will take place over Zoom on Tuesday, April 12, at 7 p.m. ET. Details and registration can be found at scotiabankgillerprize.ca/giller-power-panels.

The April Power Panel will focus on the unique structural elements of short stories and explore the subtleties and drama of the form.

Sharon Bala
Sharon Bala’s bestselling debut novel, The Boat People, won the 2020 Newfoundland & Labrador Book Award and the 2019 Harper Lee Prize for Legal Fiction, was shortlisted for several awards, and is in translation in four languages. In 2017, she won the Writers’ Trust/ McClelland & Stewart Journey Prize for her short story Butter Tea at Starbucks and had a second story on the longlist. Sharon is a member of The Port Authority, a St. John’s writing group.

David Bezmozgis
David Bezmozgis is a writer and filmmaker. Three-times nominated for the Scotiabank Giller Prize, he is the author of four books, including Natasha and Other Stories and Immigrant City: Stories. His stories have appeared in The New Yorker, Harper’s, Zoetrope All-Story and the Walrus. His most recent film work is the screenplay for the animated feature film, Charlotte, which had its world premiere at the Toronto International Film Festival and was chosen one of TIFF’s Top Ten Canadian films of 2021. David lives in Toronto and is the Creative Director of the Humber School for Writers.

Alexander MacLeod
Alexander MacLeod was born in Inverness, Cape Breton, and raised in Windsor, Ontario. His first collection, Light Lifting was a national bestseller, won an Atlantic Book Award, and was a finalist for the Scotiabank Giller Prize, the Frank O’Connor International Short Story Award, the Thomas Head Raddall Fiction Award, and the Commonwealth Book Prize. In 2019, he won an O. Henry Award for his short story Lagomorph, which was originally published in Granta and is included in his forthcoming new collection, Animal Person. MacLeod holds degrees from the University of Windsor, the University of Notre Dame, and McGill. He currently lives in Dartmouth, Nova Scotia, and teaches at Saint Mary’s University in Halifax.

Téa Mutonji
Téa Mutonji’s first collection of short stories, Shut Up You’re Pretty was shortlisted for the Atwood Gibson Writers’ Trust Fiction Prize and won the Edmund White Award and the Trillium Book Award. Her essay, The Price of Being Pretty, was nominated for a digital publishing award in the category of best essays. She holds a degree in Media Studies and minors in English Literature and Creative Writing from the University of Toronto Scarborough. She is the recipient of the Jill Davis fellowship in Fiction at New York University.

Daniel Sarah Karasik
Daniel Sarah Karasik (they/them) is the author of six books, including the new poetry collection Plenitude and the short story collection Faithful and Other Stories. Their work has been recognized with the Toronto Arts Foundation’s Emerging Artist Award, the CBC Short Story Prize, and the Canadian Jewish Playwriting Award. They organize with the network Artists for Climate & Migrant Justice and Indigenous Sovereignty (ACMJIS), among other groups, and are the managing editor of Midnight Sun, a magazine of socialist strategy, analysis, and culture. They live in Toronto.

Richard Van Camp
Richard Van Camp is a Tlicho Dene from Fort Smith, NWT. He is a renowned storyteller and best-selling author of 27 books these past 27 years. His novel, The Lesser Blessed, is now a feature film with First Generation Films and you can watch it on CBC Gem for free.