Skip to content
Giller Power Panel: From Page to Screen 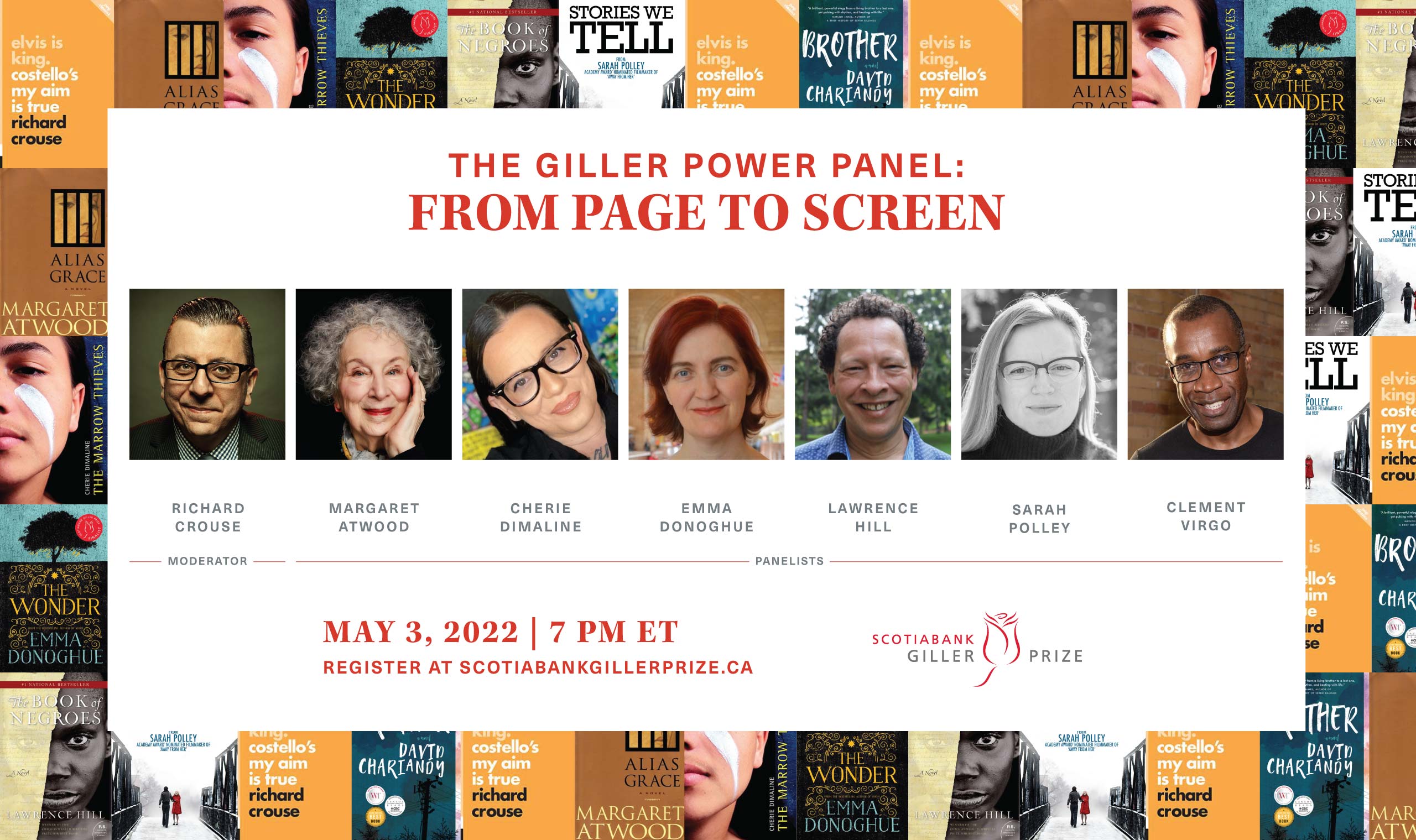 April 14, 2022 (Toronto, Ontario) – Elana Rabinovitch, Executive Director of The Giller Foundation, is pleased to announce our May Giller Power Panel. The May 3, event will explore the process of adapting books for tv and film and is entitled From Page to Screen.

The panel will take place over Zoom on Tuesday, May 3, from 7-8:30 p.m. ET. Details and registration can be found at scotiabankgillerprize.ca/giller-power-panels.

The May panel will explore how books are adapted to the big and small screen, how the writer is involved (or not) in the process, how much control they can exert over the final product, how a book gets optioned, and more.

Richard Crouse, film critic and author will moderate the panel.

Margaret Atwood
Margaret Atwood, whose work has been published in more than 45 countries, is the author of more than 50 books of fiction, poetry, critical essays, and graphic novels. Burning Questions, a collection of essays from 2004 – 2021 will be published in March 2022. Dearly, her first collection of poetry in over a decade, was published November 2020. Her latest novel, The Testaments, is a co-winner of the 2019 Booker Prize. It is the long-awaited sequel to The Handmaid’s Tale, now an award-winning TV series. Her other works of fiction include Cat’s Eye, finalist for the 1989 Booker Prize; Alias Grace, which won the Giller Prize in Canada and the Premio Mondello in Italy; The Blind Assassin, winner of the 2000 Booker Prize; The MaddAddam Trilogy; and Hag-Seed. She is the recipient of numerous awards, including the Peace Prize of the German Book Trade, the Franz Kafka International Literary Prize, the PEN Center USA Lifetime Achievement Award, and the Los Angeles Times Innovator’s Award. She lives in Toronto.

Cherie Dimaline
Cherie Dimaline is a member of the Georgian Bay Métis Community in Ontario. Her 2017 book, The Marrow Thieves, won the Governor General’s Award and the prestigious Kirkus Prize for Young Readers, and was the fan favourite for CBC’s 2018 Canada Reads. It was named a Book of the Year on numerous lists including the National Public Radio, the School Library Journal, the New York Public Library, the Globe and Mail, Quill & Quire and the CBC, has been translated into several languages, and continues to be a national bestseller two years later. Her most recent novel for adults, Empire of Wild became an instant Canadian bestseller and was named Indigo’s #1 Best Book of 2019. It was published in the US through William Morrow in July 2020. Cherie received the prestigious Writers’ Trust Engel Findley Award in 2021. Her most recent YA novel, Hunting By Stars, was published in Canada and the US in 2021, and is a 2022 American Indian Library Association Youth Literature Award Young Adult Honor Book. She lives in Midland, ON, where she is working on a few new YA books, her next adult novel and writing for film and TV projects.

Emma Donoghue
Born in Dublin in 1969, Emma Donoghue has lived in London Ontario since 1998. She adapted her Booker-shortlisted 2010 novel Room into the 2015 film (for which she was nominated for Academy, Golden Globe and Bafta awards and won a Canadian Screen Award), and has co-adapted her Giller-nominated 2016 novel The Wonder for the 2022 feature film from Netflix.

Lawrence Hill
Lawrence Hill is the award-winning and internationally bestselling author of eleven books of fiction and nonfiction, including The Book of Negroes, which was made into a six-part TV mini-series, and The Illegal, both of which won CBC Canada Reads. His previous novels, Some Great Thing and Any Known Blood, also became national bestsellers. Hill’s nonfiction work includes Blood: The Stuff of Life (the subject of his 2013 Massey Lectures), and the memoir Black Berry, Sweet Juice: On Being Black and White in Canada. In January 2022, HarperCollins Canada published Hill’s latest book — the novel Beatrice and Croc Harry.

Hill’s volunteer work has included Crossroads International, the Black Loyalist Heritage Society, Book Clubs for Inmates, The Ontario Black History Society, and Walls to Bridges – a non-profit group offering university courses to incarcerated Canadians. A professor of creative writing at the University of Guelph, he has spent more than a decade volunteering in book clubs in federal penitentiaries. Through Walls to Bridges, he taught a third-year undergraduate memoir writing course to women incarcerated in the Grand Valley Institution for Women in Kitchener ON.

Currently, Hill is writing screenplays for a TV miniseries in development, as well as a new novel about the thousands of African-American soldiers who travelled from military bases in the Deep South to help build the Alaska Highway in northern British Columbia and Yukon during World War Two. He is a member of the Order of Canada, and a winner of the Commonwealth Writers’ Prize and the Rogers Writers’ Trust Fiction Prize, and (for screenwriting) a co-winner (with Clement Virgo) of the NAACP Award and a Canadian Screen Award. He lives with his wife, the writer Miranda Hill, in Hamilton ON and in Woody Point, NL.

Sarah Polley
Sarah Polley is a Governor General’s Award-winning writer-director-producer whose dramatic features include Away from Her (nominated for an Academy Award for Best Adapted Screenplay and winner of the Canadian Screen Award for Best Motion Picture and Achievement in Direction) and Take This Waltz. Her autobiographical Stories We Tell was awarded Best Documentary by the Toronto Film Critics Association, the New York Film Critics Circle, the National Board of Review and the Los Angeles Film Critics Association. The film was shortlisted for the Academy Award for Best Documentary Feature. Sarah’s next feature film, an adaptation she wrote of Miriam Toews’ acclaimed novel Women Talking which she also directs, will premiere in 2022. Polley’s adaptation of Margaret Atwood’s Alias Grace for Netflix and CBC, which she Executive Produced, garnered six Canadian Screen Awards including Best Screenplay, Director, Actress and Limited Series. Sarah served as Executive Producer on Attiya Khan’s A Better Man and co-directed and executive produced the web series Hey Lady!.

Clement Virgo
Clement Virgo is one of Canada’s foremost film directors. His TV directing credits include Empire (Fox), The Wire (HBO), The L Word (HBO), American Crime (ABC), and the OWN network drama series Greenleaf (2017), on which he also served as Executive Producer with Oprah Winfrey. Virgo is currently in post-production on his feature film Brother, based on the award-winning novel by David Chariandy, and is also in development with CBC on the limited series Half-Blood Blues, based on Esi Edugyan’s prized novel.

In 2015, Virgo directed and co-wrote a six-part miniseries adaptation of Lawrence Hill’s The Book of Negroes which debuted to record-breaking numbers on the CBC in Canada and on BET in the U.S. and was nominated for two U.S. Critics Choice Television Awards, including Best Limited Series and four 2015 NAACP Image Award Nominations including Best Miniseries and Best Writing (Virgo, Hill).

His first feature film, Rude, premiered at Cannes in 1995 and played festivals around the world including London and Sundance. Other feature films include Poor Boy’s Game and Lie With Me, based on his partner’s Tamara Faith Berger’s first novel, which played top tier festivals including Berlinale and TIFF and sold in over 40 countries. Virgo currently sits on the Canadian Film Centre’s Board of Directors.